At the end of 2019 Samsung has presented two new mid-range smartphones. We talk about the Galaxy A51 and Galaxy A71. Today we have to talk about the rest of the new devices of the Galaxy A 2020 series. Because there are still a lot of them to renew. Recently, we talked about the Galaxy A81 and today it is the turn of the Samsung Galaxy A41. This device has a very good track record in Samsung, as the Galaxy A40 managed to be one of the best selling phones in Europe. Not from the mid-range only, but from the entire market.

It is normal that Samsung wants to exploit the amount of sales of the Galaxy A40 and launch a second device by 2020. We still do not know many details of this device, but it is expected to be a somewhat more modest Galaxy A50. Now that it has been through Geekbench we can know what will make it more modest.

The Galaxy A41 will arrive with a MediaTek Helio P65 processor 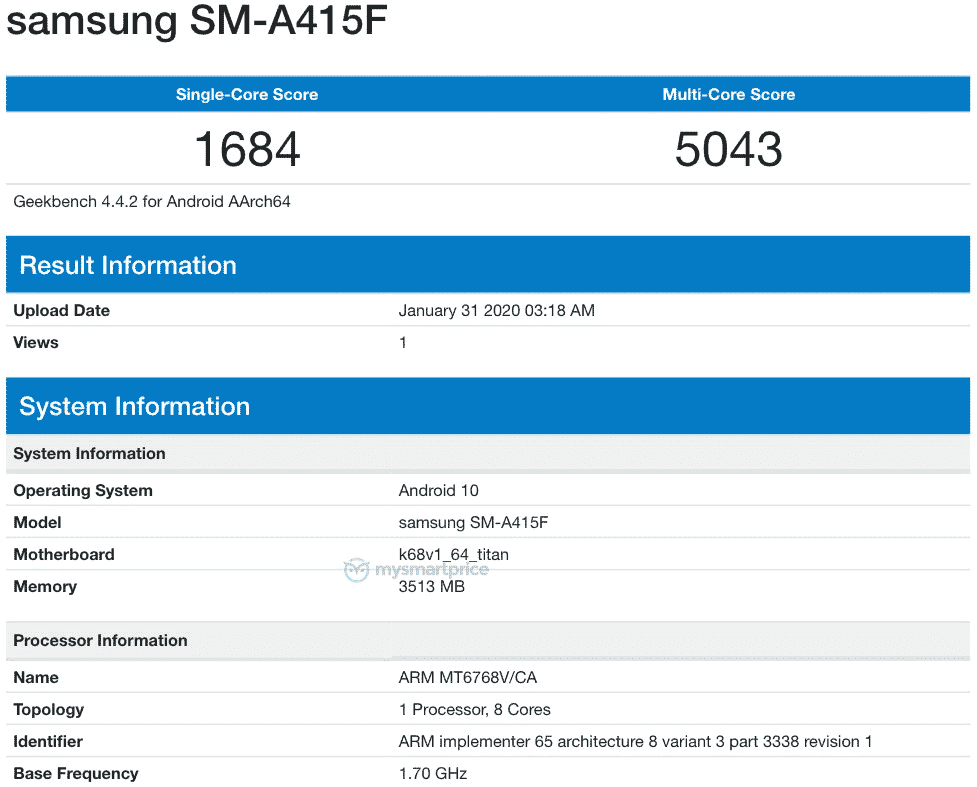 We have bad news for MediaTek detractors. Samsung has relied on this chip company again to boost some of its mid-range devices. The first to unveil is the Galaxy A41. This information does not arrive from Samsung itself or an official channel, but it is very likely that we are facing real information. Geekbench has revealed 3 key features of the Galaxy A41.

The first and most important has been the processor. This device arrives with MediaTek Helio P65. It is a mid-range chip with a maximum frequency of 2 GHz and an architecture of 12 nanometers. It is divided into two clusters of 6 and 2 cores to make a total of 8. We can not say that it is a bad processor, but its equivalent in Qualcomm sure convinces more.

Read Also:  Exynos 2200 will launch early next year with a focus on gaming

Geekbench also confirms that it will arrive with 4 GB of RAM and Android 10. We expected this last detail, but still, we like it a lot. The size of the device could be very similar to that of the Galaxy A51. It will have a physical fingerprint sensor and a lower screen resolution than the A51.

It is still early to figure out how this Samsung Galaxy A41 will be, but that it arrives with a MediaTek processor leaves us a thorn stuck. The presentation date could be announced very soon and could be put up for sale within the MWC of Barcelona.