Sony would consider offering the PS5 Remote Play on Nintendo Switch. An idea also pursued by Microsoft with xCloud.

The Nintendo Switch has shown that there is space for a hybrid console between portable console and home console. The console is a real success today, sold over 50 million copies, and recently confirmed by the arrival of the Switch Lite. This last one will not push Nintendo to launch a new model “Pro” before a while.

This success seems to have attracted the attention of video game publishers. But also of other console manufacturers, Microsoft and Sony.

Sony has recently published a survey that concerns the Remote Play function of the PlayStation, which allows you to play your console remotely, thanks to another device.

The questions are many and varied, there are questions of privacy, parental controls, or simpler things like the possibility of choosing the quality of video and audio streaming. Sony also asked if players would be interested in a compact DualShock controller that is easier to carry. 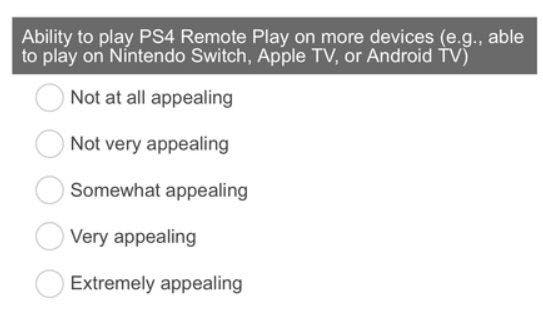 Join GizChina on Telegram
One of the questions, however, received a lot of attention: “ would you be interested in the possibility of playing in Remote Play on more devices like Nintendo Switch, Apple TV or Android TV ”. Actually, the question was for the PS4 games, but we expect it also to support the upcoming PS5 games.

This question suggests that Sony is considering offering its Remote Play service on Nintendo Switch.

Because of its popularity, but also its design, the Nintendo Switch is a very coveted device for mobile gaming. It has the merit of integrating a real joystick in a portable format.

At the beginning of 2019, a rumor on the Xbox side predicted that Microsoft would add several games to the Nintendo Switch. That’s before possibly offering its xCloud cloud gaming service.

The Redmond company has effectively published Ori and the Blind Forest Definitive Edition on Switch. As well as Cuphead and Minecraft. Now, the brand could tackle bringing its cloud gaming service. But nothing has been announced in this direction for the moment.

Of course, whether it is Sony with Remote Play or Microsoft with xCloud, the arrival of this kind of service will first have to be approved by Nintendo. Difficult to know if the firm will want to share the land of its own console for other ecosystems.