While Google made the news with Stadia in late 2019, Nvidia had so far remained discreet about its Cloud Gaming service: GeForce NOW. In beta for many months and after testing several formulas and options, the service is finally available for everyone. GeForce NOW can transform any PC, MAC, SHIELD TV and Android phone into a gaming platform.

NVIDIA therefore announces the opening to the general public of its cloud gaming service, GeForce NOW. It has been in tests by 300,000 members in 30 different countries!

GeForce NOW allows players to access thousands of games through a catalog powered by NVIDIA and partner game publishers. With GeForce NOW, players can instantly play compatible games they already own and enrich their library from the platforms they use (Steam, Battle.net or UPlay). In total, the service brings together hundreds of games from over 50 publishers.

Each game gets direct updates in the cloud, so the library is always accessible and up to date. Nvidia does not offer titles for sale, which is much simpler than on Stadia for example, since you can enjoy not only the new, but also your old games for free. There is no limit as long as the game is compatible with the service. NVIDIA will therefore continue to enrich the catalog of instantly accessible games while offering more than 1,000 downloadable games. They will add games every week based on member requests, game popularity, and publisher feedback. If a player does not see a game they want to play, they can report it to NVIDIA and the publishers.

For its launch, the service offers 2 very accessible plans: 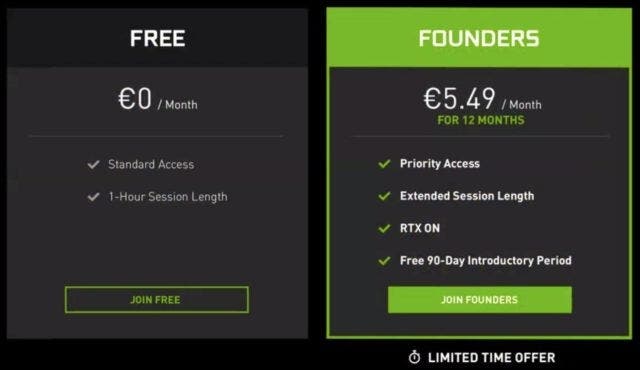 The 2 offers offer you a streaming of your games up to 1080p@60fps, because 4K is not yet supported. The advantage is that the necessary bandwidth is less important than certain competitors, and that your backups are synchronized in the Cloud, allowing access where you want.

Finally, note that GeForce NOW is not compatible with iOS, and that compatibility with Chromebooks, therefore Google Chrome, is in plans for this year. Playing in your browser without a specific application as offered by Google Stadia will therefore also be possible at Nvidia.

Next The UK wants only electric cars for sale! Gasoline and diesel cars will be banned in 2040