It’s pretty strange for Samsung to be offering a giveaway when the prize is a Xiaomi smartphone. Although these manufacturers may struggle for the same market, they also patronize each other. Yesterday, Samsung ISOCELL (Samsung Semiconductor Co., Ltd. Shenzhen Branch) held sweepstakes to repost a Weibo post of ISOCELL HMX and its promotional video. After reposting, Samsung ISOCELL will conduct a draw on February 19th. Three fortunate fans will each receive a Xiaomi CC9 Pro. As of now, the video already has over 3,000 reposts. There is nothing strange about this, the Xiaomi CC9 Pro uses the Samsung ISOCELL 108MP camera. No Samsung device currently uses this sensor. 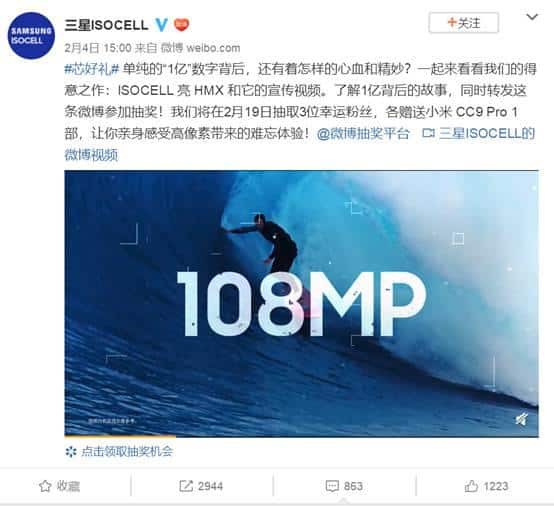 The Xiaomi CC9 Pro is the flagship smartphone from Xiaomi which touch-down in November 2019. It has five cameras on the rear. According to the company, the camera module cost is five times that of the previous generation Xiaomi CC9. The main camera is the first mass-produced 108MP camera. This camera was jointly developed by Samsung and Xiaomi (ISOCELL Bright HMX sensor). It has a sensor area of ​​1 / 1.33 inches, uses a 7P lens module, and a premium version uses an 8P lens module. The Xiaomi CC9 global version is the Xiaomi Mi Note 10.

Previous The Samsung Galaxy M31 would have a 64MP main sensor