We are about to see the new batch of smartphones for 2020. However, there are still Android devices to take into account that were launched last year. The AnTuTu Benchmark, a well-known application that measures the performance of smartphones, showed us the TOP 10 most powerful Android smartphones of January 2020. And we have good surprises. 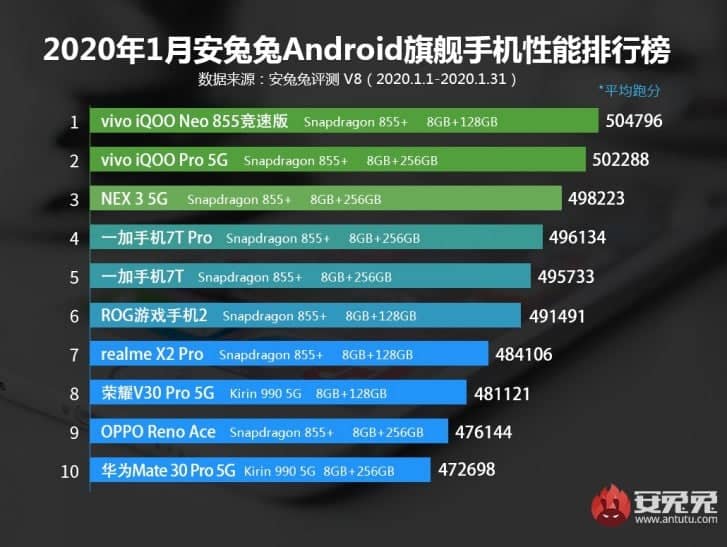 Vivo occupies the first 3 places categorically. Although the brand is not present in all markets in a strong way, Vivo is one of the companies that sell a lot of smartphones in China. The ideology of quality/price is also a factor to take into account in this company.

In turn, OnePlus (which is part of BBK which also owns Vivo, Oppo and Realme) brings its last two smartphones to the ranking. The OnePlus 7T Pro and OnePlus 7T occupy the fourth and fifth places respectively.

Xiaomi is one of the brands that could not stand the improvement of smartphones in the latter part of 2019. Thus, the company lost its places in the Top 10. I remember that Xiaomi’s gaming smartphone led this table for months in 2019. It is hoped that with the arrival of the Mi 10 and Mi 10 Pro, the brand will be able to enter strong again in the ranking.

The 10 most powerful mid-range Android smartphones of January 2020 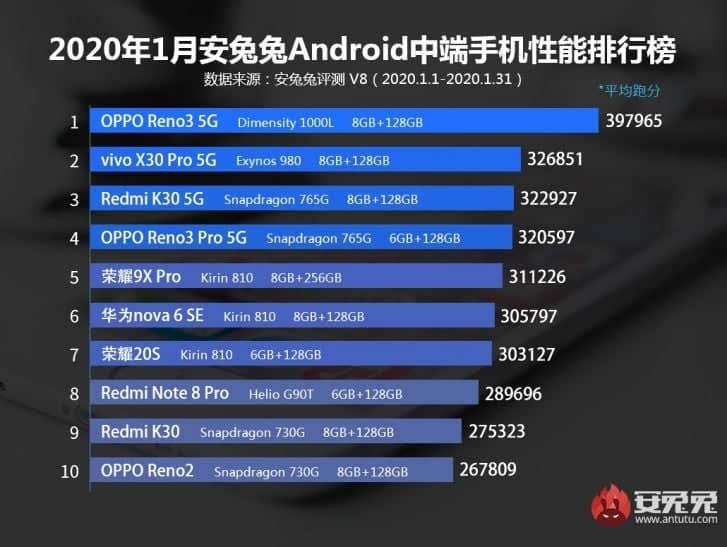 We have also the Top 10 performance ranking of midrangers, where the Oppo Reno3 is miles ahead of the second-placed vivo X30 Pro. Interestingly enough, the Mediatek Dimensity 1000L-powered Reno3 also outperforms its Snapdragon 765G-packing Pro sibling.

The benchmark website also reminds that this is a raw comparison of performance results and cannot be responsible for comparison in the camera department, design, battery capacity or fast-charging abilities.

The basic Oppo Reno3 was launched on December 31, so this is its first month where it could have been benchmarked on AnTuTu. Mediatek uses Cortex A77 cores and Mali-G77 GPU, which seems like a properly powerful combo.

It is worth remembering that these performance testings are not everything on a smartphone. Nothing better than a good User Interface to create a pleasant interaction with the device.

So don’t look at smartphones just for their benchmark score. There are many other important aspects to consider.

Previous Huawei will preinstall 70 popular Android apps on its smartphones