After an unexpected Galaxy Z Flip commercial which took the internet by surprise two days ahead of Samsung’s Unpacked event the highly anticipated foldable smartphone managed to pop-out in yet another ad. This time, however, we are in for a limited edition version of the premium smartphone that was made in partnership with US fashion brand Thom Browne.

This rather interesting ad reveals the exclusive version of Galaxy Z Flip all the way at the 1:30 mark. What’s notable it that it features a silver frame in contrast to the previously seen black color on the regular Galaxy Z Flip. Since this is a Thom Browne exclusive variant, you’ll get the red signature, white and blue stripe on the rear.

Since this is an exclusive variant it makes sense for Samsung and Thom Browne to provide a stylish exclusive retail package for it. Apart from the exclusive box complete with a phone case, Galaxy Buds+ we also have what seems to be a Galaxy Watch Active 2. Unfortunately, the price still remains a question for now. However, if we take the phone’s price of $1,500, we can expect this one to go for more with some rumors estimating a $2,500 asking price. Worth noting that the ad states that the exclusive bundle will have limited availability. 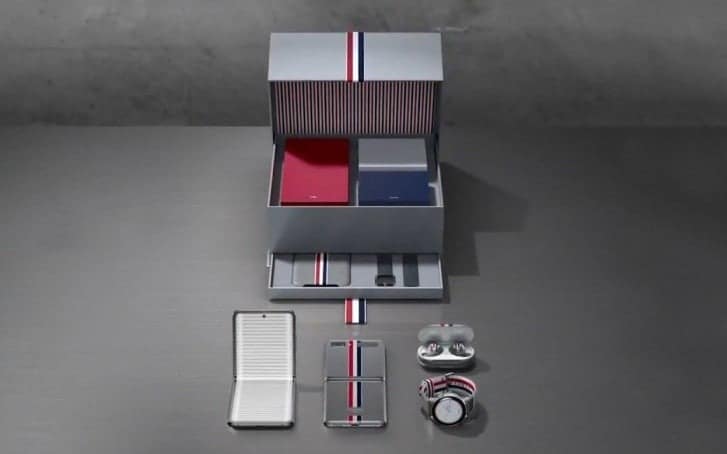 Do you think that this retail package worths the $1,000 extra price tag in comparison to the vanilla Galaxy Z Flip? The bundled Galaxy Buds+ and Galaxy Watch Active definitively add to the value. The rest, we can assume that it is due to the Thom Browne branding. We’ll probably know all the details tomorrow after the official unveiling of the Galaxy Z Flip and Galaxy S20 series.