Oppo is gearing up to launch the Reno 3 Pro in India. Although it has the same name, this handset won’t be identical to the Reno 3 Pro that got official in December. Compared to the Chinese version, there are some differences, with the major one being the use of a different chipset. While the Chinese Reno 3 Pro boasts Snapdragon 765G, which is a 5G SoC, the Indian variant will set for a different chipset. There are no operational 5G networks in India yet. For that reason, Oppo doesn’t see a need of equipping the smartphone with a 5G-ready SoC. We believe that Indian customers would still enjoy the awesome performance brought by the Snapdragon 765G, but we can’t have everything.

According to information from Tasleem Arif, Oppo’s VP and Head of India R&D, the company still is preparing “a pipeline of products” with 5G for India later this year. But the Oppo Reno 3 Pro won’t be the starting kick for 5G products in the country. 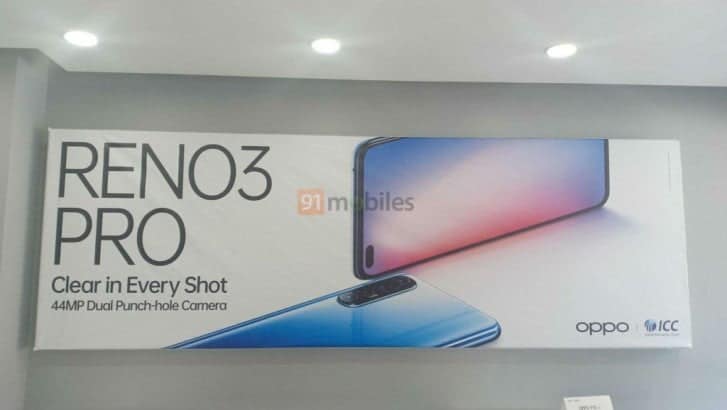 Thanks to a leaked poster, courtesy of 91mobiles, we can get a glimpse of the upcoming smartphone. The image clearly states that we are going to see a different selfie cam setup in the Indian variant. This time around, Oppo is going with a dual punch-hole, with one of the cameras having 44MP resolution. This is a major contrast over the 32MP single selfie shooter on the original. That’s the first time that we see a 44MP resolution in a smartphone. For now, it’s unclear if Oppo will use pixel binning technology to deliver 11MP selfies.

The secondary module on the front will be a depth sensor to aid in Portrait mode shots. Apart from the mentioned changes, we are going to see the exact Quad Rear camera setup with a 48MP main sensor, a 13MP telephoto, and 8MP ultrawide, and a 2MP monochrome snapper. In addition, the Reno 3 Pro has a 6.5-inch FHD+ AMOLED display with a 20:9 aspect ratio. It comes with up to 12GB of RAM and 256GB of storage. A 4,025mAh battery runs the show along with Android 10 and ColorOS 7 on top.