A few days ago Samsung finally took the wraps off its 2020 flagship series in the form of Galaxy S20 smartphones. Now, while we’re still months away from the next flagship lineup, the company will keep focusing in the other segments such as mid-range smartphones and tablets. The latter, perhaps, isn’t the most exciting market nowadays, however, Samsung keeps coming with new devices every year to keep its relevance among the few companies that still bet in the tablet segment. According to reports, the company is getting ready to unveil a new Galaxy Tab A with 8.4-inch. The referred device decided to pay a visit to Google Play Console (via) which revealed some of the key specifications. 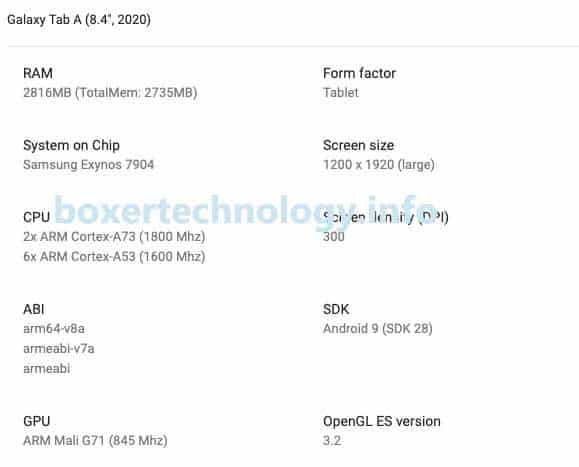 According to the leaked information, the Galaxy Tab A bears 1200×1920 pixels of resolution on its 8.4-inch form factor. The handset is powered by Samsung’s in-house made Exynos 7904 chipset. It’s an octa-core SoC with 2x ARM Cortex-A73 cores working at 1.8GHz frequency and 6x ARM Cortex-A53 cores running at 1.6GHz. The graphical part is run by an ARM Mali G71 GPU running at 845Mhz. Multi-tasking purposes are covered by 3GB of RAM. Specs-wise this isn’t a very impressive package of specs, however, it’s a target on the mid-range segment. Curiously, Google Play listing reveals Android 9 Pie. Hopefully, it is just a prototype and it will launch with Android 10.

There are some details that still remain a mystery such as cameras and battery capacity. We believe that these will pop-up as the release comes near. Samsung still didn’t reveal any plans for upgrading its tablet lineup in 2020. However, this leak is just a hint that the company is already working on it.