Xiaomi is preparing a new iteration for its gaming smartphone series – Black Shark. That’s not a surprise, after all, gaming smartphones are increasingly popular nowadays, and Xiaomi can be considered as one of the brands that gave the initial kick in the segment. The company will unveil a new Black Shark 3 this year with 5G capabilities, Snapdragon 865, QHD resolution and 120Hz refresh rate display.

Today, the brand manager posted a poll on Weibo, asking which battery charging + capacity + cycles is the best for gaming devices. They effectively revealed the setup of the Black Shark 3. It will debut with a 5,000mAh battery that charges via 65W fast-charging that can make the battery from flat to 100% in just 38 minutes. 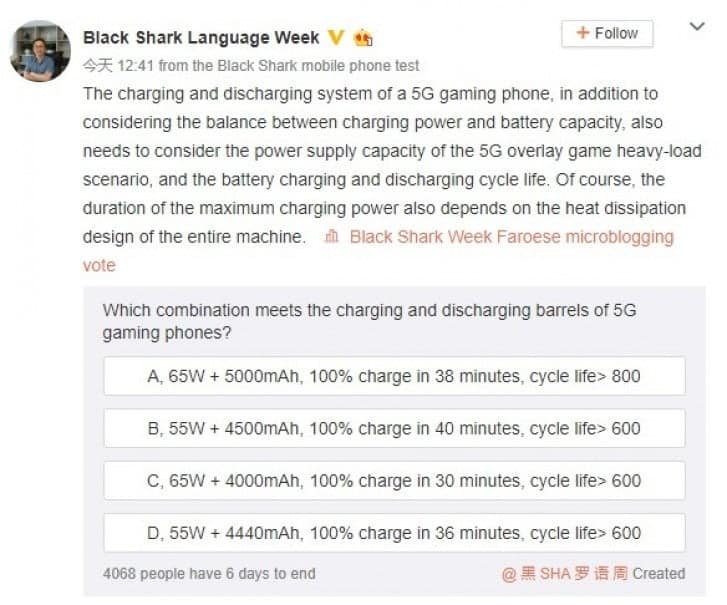 According to the report, it’s easy to guess the right choice since the three other are combos of existing smartphones. 55W fast charger for a 4,500mAh comes with the Huawei Mate X. The 65W + 4,000mAh is the Oppo Reno Ace. 55W + 4,440 mAh is the combo found in iQOO’s upcoming iQOO 3 5G. Moreover, all of these succumb to degradation after 600 cycles.

Back in November last year, a Xiaomi smartphone surfaced with a 66W charger codenamed MDY-11-EF. Moreover, a new listing from CCC reveals that a Black Shark phone will be compatible with the very same charger.

The Black Shark 3 will launch sometime this year and is rumored to include 16GB of LPDDR5 RAM.

Next FuntouchOS 10 release has been delayed due to Coronavirus outbreak