The Coronavirus outbreak spoiled plans of Xiaomi with the development of MIUI 11. Now, the crescent epidemic is affecting one more smartphone maker. Vivo announced that it will be forced to delay the rollout of ifs Android 10-based operating system – FuntouchOS 10. That is really underwhelming considering that Google started the developer preview of Android 11. We are some months away from the next Android version release, and Vivo smartphones will be running the two-years-old Android 9 Pie for some months more.

Vivo had plans of starting the beta test phase this month, the epidemic will strongly change the company’s plans. Now, the company expects its first FuntouchOS 10 public beta to arrive in late March. The first devices to get a taste of it will be NEX 3, NEX 3 5G, NEX S, NEX Dual Display, X27, and X2 Pro. 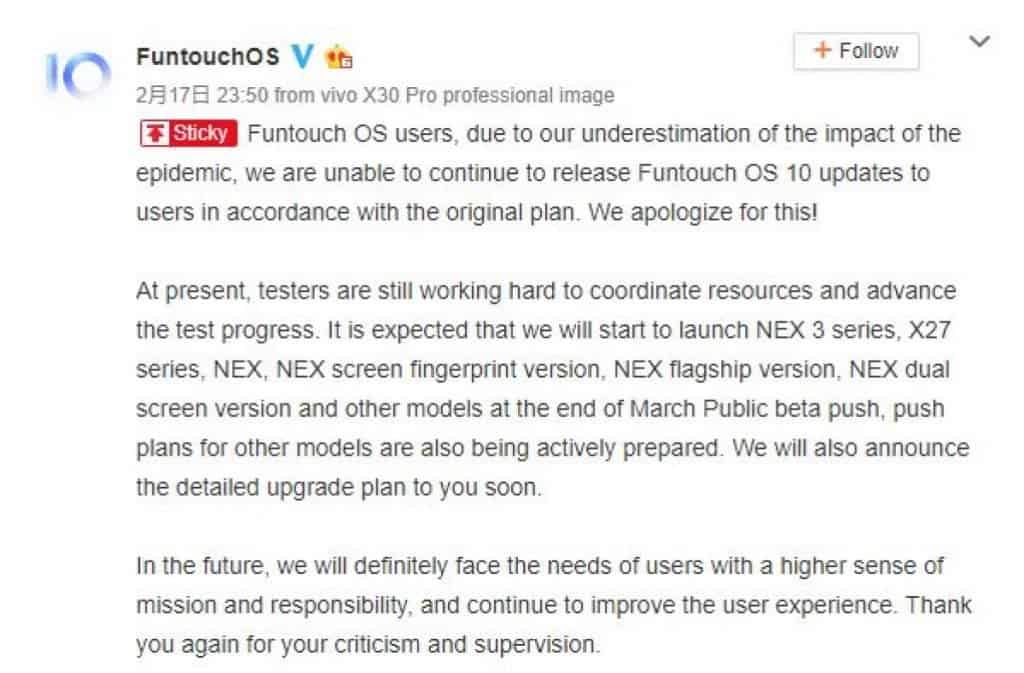 Among the biggest changes, the FunTouchOS 10 will bring a big visual overhaul with new icons, animations, live wallpapers, and edge lighting. Moreover, it will include some of the standard Android 10 features such as gesture navigation, privacy management, and dark mode. Hopefully, the company won’t take months to release the stable update for the referred devices. After all, as we said before, Android 11 is already on the corner.

Previous Black Shark 3 5G to come with a 5,000mAh battery that charges via 65W

Next Huawei: Google advises not to install its apps on non-certified smartphones