Since the ban imposed against the Chinese Huawei, we have to agree that their smartphone launches are quieter than before. However, the company is doing all it can to spread the market with new releases. Apart from the upcoming Huawei P40 series that is set to sail on high-end waters, the company seems to be aiming for the mid-range market as well. Based on this, a new Huawei midrange popped up on GeekBench with the MED-AL00 model number.

The phone was previously spotted on the databases of Chinese 3C and TENAA agencies. The GeekBench tests confirm that the alleged device is running with the MediaTek’s Helio P35 SoC. Multi-tasking purposes are covered by 4GB of RAM while the software part is run by Android 10 OS. Interestingly enough, the device managed 884 points in the single-core test and 4,356 on the multi-core tasks. 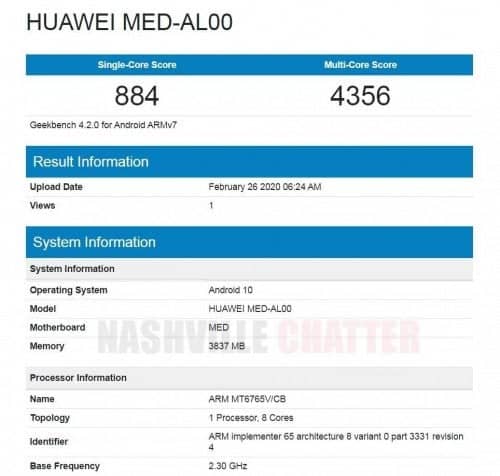 According to rumors, the referred device can make a debut as soon as in the next month. However, we are curious to see how it will be named. Could it be a new iteration for the Nova series? All we know right now that, judging by the specs, it will be a very affordable smartphone with a high focus on the low-end segment. The Helio P35 is a capable SoC but lags behind better options we have now such as the Helio G70 also from MediaTek.