MediaTek started a reinvention on its portfolio of chipsets last year with the debut of Helio G90 and G90T SoC. The company really managed to bring solid performance to a low price range with the chipset that gave power to the popular Redmi Note 8 Pro. Late in December, the company gave a step further with the announcement of Dimensity SoCs featuring 5G. This year, the company announced Helio G70, and there’s even G80 for mid-range smartphones. While MediaTek’s future is clearly tracing a path towards the G and Dimensity series, there’s still some room for the old-school Helio P SoCs. Today, the company unveiled a new member for the P series in the form of Helio P95 SoC.

The Helio P95 is an Octa-Core chipset with 2x Cortex-A75 cores clocked at 2.2GHz and 6x Cortex-A55 clocked at 2.0GHz. There is an Imagination PowerVR GM 94446 GPU with a 10% improvement in performance over the last generation. The new chipset also features a large L3 cache. The new System-on-Chip comes with support for up to 8GB LPDDR4X RAM (1866MHz) and UFS 2.1 storage. In the camera department, we have support for 64MP sensors or 24MP + 16MP dual cameras. The SoC supports displays with resolutions of up to 2520 x 1080 with a 21:9 aspect ratio. 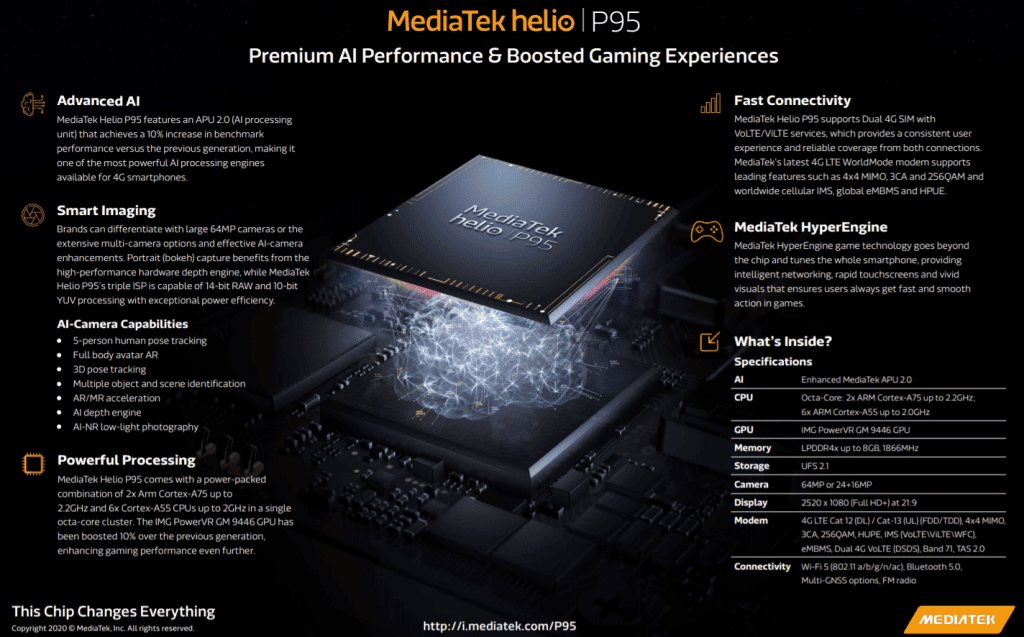 The SoC has a triple ISP with 14-bit RAW and 10-bit YUV processing. It also has AI-camera enhancements such as AI-NR low-light photography, 5-person human pose tracking, multiple objects, and scene identification, and AI depth engine. The new P95 also boasts APU 2.0 which MediaTek claims achieve a 10% increase in benchmark performance compared to the last generation. According to MediaTek, this makes it one of the most powerful AI engines for 4G LTE smartphones.

Now what remains to be seen is if companies will adopt this new SoC. No manufacturer has announced if it will be the first to launch a phone with it. Moreover, MediaTek has also not revealed when we should expect to see it in devices. In an age of gaming SoCs and 5G chips, we are curious to see if companies will be betting on a standard chipset.

Next Apple to Launch Macbook with ARM Chipset in 2021 First Half, Ming-Chi Kuo Says