Realme is currently gearing up for its upcoming launch event in India where the brand will showcase its budget devices. We’re looking at the next iteration i.e. Realme 6 lineup. As expected, the lineup will consist of two devices namely Realme 6 and Realme 6 Pro. For those who’re unaware, the devices will see its official unveiling on March 5. 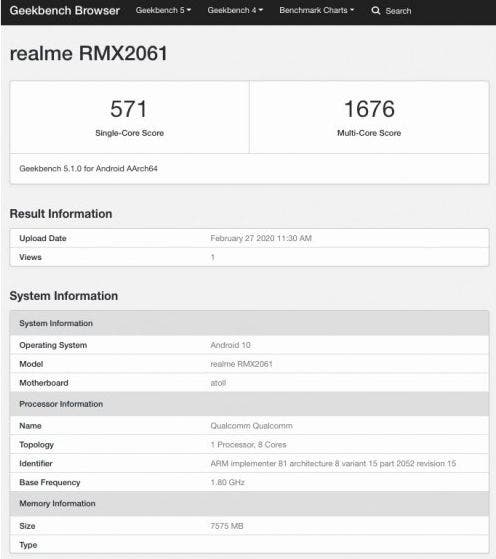 Ahead of the launch, Realme 6 Pro stopped by the GeekBench listing for the benchmarks. As expected, it has revealed some key information about it. First up, the phone will come with the model number RMX2061. As per the listing, the device runs on a 1.8Ghz chipset paired with 8GB RAM. Sadly, the processor model is not revealed. Various previous reports point towards the snapdragon 720G SoC.

Furthermore, the device makes use of the latest Android 10 software. As expected, we should see the Android 10 with Realme UI 1.0 on top. Coming to the benchmark scores, Realme 6 Pro managed to score 571 points in the single-core performance. The multi-core performance, on the other hand, gave this device a score of 1676.

Looking at the previous teasers and leaks, Realme 6 lineup should come with a quad-camera setup featuring 64MP primary sensor. Apart from the main sensor, the device will feature an ultrawide lens, telephoto lens and a macro sensor. On the front side, we’re expecting a pill shape punch-hole design housing dual selfie shooters.

The key highlight of the lineup is going to be 90Hz refresh rate display, punch-hole selfie camera and 64MP primary sensor. While the battery capacity is unknown, the device will feature a 30W VOOC fast charging tech. There is no information on the screen size of now. Although the previous leak points towards a Full HD+ panel.

With official launch nearing, we should hear more about the device in the coming days.