Today, smartphone manufacturer Realme announced its first 5G flagship smartphone X50 Pro 5G as well as a new AIoT strategy. Realme said that its global smartphone shipments in 2019 exceeded 25 million units, a year-on-year increase of more than 500%. In addition, more than 5 5G smartphones will be launched in 2020. Moreover, Realme also officially announced its corporate strategy for 2020. In the future, Realme will take the “smartphone + AIoT” dual-drive strategy as the core of the enterprise. And it will build a smart wave of life for young people around hardware, software, and ecology. 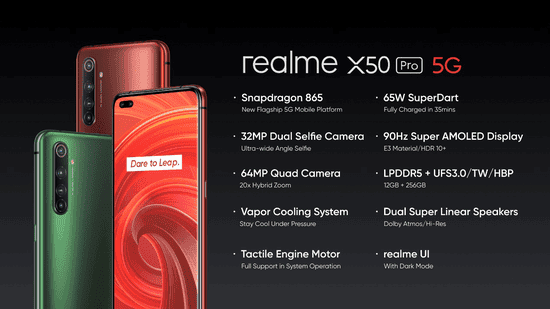 Realme Spain country manager Emilio Álvarez said that since the third quarter of 2019, Realme ranks among the top 7 in global shipments. Also, it has become the world’s fastest-growing smartphone brand. In 2019, Realme entered 25 global markets, ranked among the top 5 in the 5 major regional markets, and appeared among the top 5 brands in 1 month in Spain. In India, the online share reached 26.5%, ranking second. It ranked fourth. In Indonesia and the Philippines, this brand is among the top four. As for other markets, in Egypt, Realme ranked fifth. In 2019, its global shipments exceeded 25 million units, a year-on-year increase of 500% compared to 2018. And it ranks among the mainstream smartphone brands in the world.

He also said that in the smartphone business, Realme is committed will launch more than 5 5G smartphones, covering everything from a thousand-yuan entry-level niche to the flagship segment. In China, it will implement a comprehensive 5G strategy. It won’t release 4G smartphone products anymore. In many countries in Europe, India, Saudi Arabia, and Southeast Asia, they are committed to pushing 5G products to more markets.

It is reported that in 2020 Realme will release more than 20 AIoT products.