Realme is not known as the fastest Android OEM when it comes to updates. However, with the latest Android 13 release, the company has been trying to change. We’re seeing devices joining the beta program much earlier the usual. Also, the company decided to bring Android 13 before Realme UI 4. So, despite the recently-released Realme 10 Pro series, all phones getting Android 13 are getting it in form of a new Realme UI 3.0. Today, the company is adding a bunch of devices to the Android 13 beta program. Namely, we have the Realme GT Neo2, GT, and Narzo 50 5G joining the list.

Since this is a beta build, it’s not covering all Realme GT Neo2 and other phones’ units. You will need to apply for the early access build. Nowadays, that is quite easy. YOu just need to ensure your phone is running the latest stable software version. After that, go to Settings >> Software Update and click on the top-right corner icon. Tap on Trial Version >> Apply Now. After that, you’ll submit your details and wait to see if you’ve been selected. Worth noting, that we don’t recommend it to those without much knowledge and that need the phone on a daily basis. Early Access builds can bring several bugs and other annoyances that might affect your everyday usage. 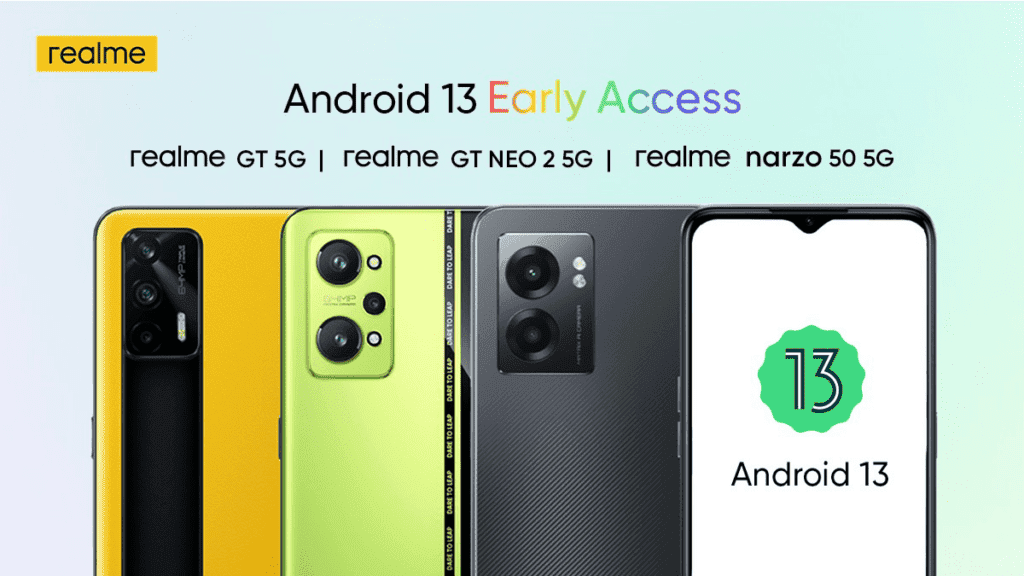 According to the company, there are limited seats for all three smartphones. That said, not all Realme GT Neo2, GT, and Narzo 50 5G owners will be selected. So if you are desperate for Android 13 on your phone, it’s better to sign up right now. It’s not easy to determine when the stable build will reach any of these three phones, but the company is progressing well. The Realme UI 3.0 brings some enhancements to its smartphones. There is an all-new Aquamorphic design (the same as OnePlus and ColorOS) that brings fluid animations. The theming engine is now better implemented, and there are also security improvements.

Next Snapdragon 782G: This is the future best-selling Qualcomm chip