With the official release of Android 10 by Google in September last year, Realme promised that most of its smartphones would receive Realme UI with an Android 10 base. Realme UI came to fulfill the company’s promise of introducing a new firmware that is more closer to vanilla Android. We can say that it uses Oppo’s ColorOS as a base, but in a way that makes it more close to Google’s vanilla Android. The company is slowly fulfilling its promise with Android 10 updates for several smartphones. Today, the company rolled out the update for the Realme 5 Pro and now the Realme X is getting the same treatment.

The package is named RMX1901EX_11_C.01 for the Realme X and weighs in at – 3.51GB. The update brings a brand new user interface with a clean approach and vivid colors. All the fancy features present in the recently released Realme UI are also present in the package. Of course, the Android 10 nature ensures System-Wide Dark Mode, more privacy features and navigation gestures. 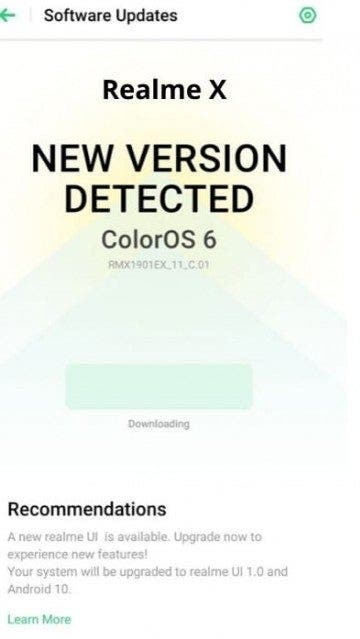 One of the highlights of this update is Personal Information Protection that feeds empty personal data to pages and apps that need access to certain fields to function. The feature ensures the protection of your call history, contacts and messages. The update is rolling out in batches, so it may take a few days to reach all the eligible units.

According to Realme’s timeline, the next in line for this update is the Realme X2 and X2 Pro. Both devices are part of the beta program, now users can finally expect a stable update.