The iPhone XR once again dominates, nearly 1 percentage point higher than the second-ranked competitor. The iPhone 11 ranked second in market share throughout the year. Because this phone has been sold for less than 4 months, it is a very eye-catching achievement.

Also Read: Global Smartphone Market Will Decline By 2.3% In 2020 Due To Coronavirus

The Samsung Galaxy A50 surpassed the Galaxy A10 with a slight advantage. The gap between these two products and the Galaxy A20 is only a few tenths of a percentage point. This shows that Samsung has achieved greater success in the sale of non-flagship smartphones.

Samsung A-series phones offer features similar to the Galaxy S and Note series, but at a much cheaper price. The Samsung Galaxy A50, A10, and A40 all entered the top five in Europe, while the Galaxy A10 ranked first in two major markets in Latin America and Middle East Africa.

It should be noted that these are not 5G phones. But this situation may change later this year.

Counterpoint also lists the top five smartphones for sales in different regions in 2019. The US market is dominated by the iPhone, while Samsung’s products have failed to enter the top five. In the South American market, a Motorola smartphone has also entered the top five. Europe and Asia Pacific, with the exception of China, are dominated by the iPhone and Samsung. However, the situation in China is completely different. The top five are from OPPO, VIVO, and Huawei.

Read Also:  Apple AR / VR Headset has been delayed to 2023, price has been tipped 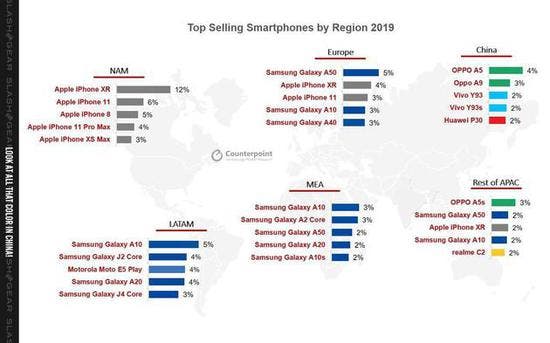 One of Realme’s products entered the top five markets in other Asia Pacific markets. This company was founded in May 2018. Counterpoint estimates that Realme is currently the world’s fastest-growing smartphone maker. Compared with 2018, Realme’s annual growth rate in 2019 reached 426%.

Huawei’s single product performance does not seem to be good. But Huawei’s overall brand is still strong, ranking second in the world in total shipments. This also shows that Huawei does not need to seize the market with a single model. 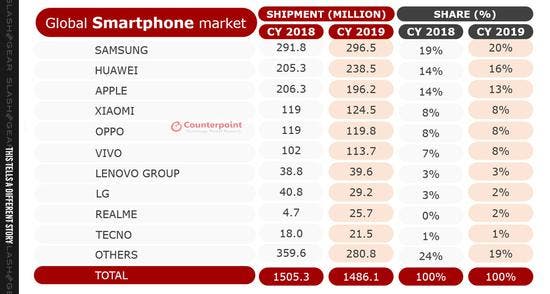