Vivo is among one of the hottest smartphone makers in the market. The company makes plenty of smartphones with appealing design, ground-breaking hardware, and features. Vivo is also one of the most innovative companies in the industry right now, it is always trying new concepts and products. However, there’s something that is pretty much established in Vivo smartphones. You don’t buy them to get quick Android OS updates. The company is among the slowest to deliver these, and as you may expect, the situation isn’t different from Android 10.

Vivo unveiled FunTouch OS 10 back in December. The latest iteration of the company’s software skin is based on Android 10 and appeared months after Google initially released the final version of the OS. Unfortunately, despite the update announcement, the company’s smartphones are still missing the last year’s Android version. Users are starting to get impatient, after all, in some months we’ll have Android 11 from Google.

If you’re among the users who are desperate for an update, it seems that good news are coming. After some delays that have been attributed to the COVID-19 outbreak, the company has finally announced a revised update timeline for its devices. Worth noting, that this update generally applies to the domestic market of China. International models will lag and this isn’t a surprise. 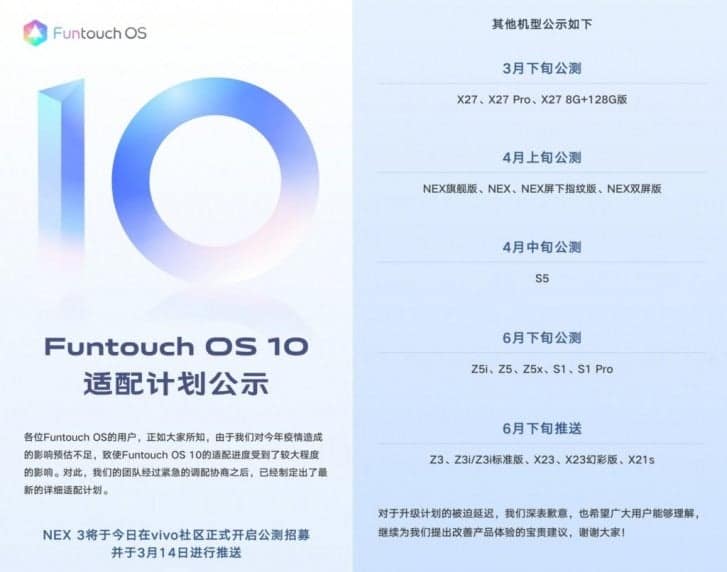 The first devices to get a public beta of Funtouch OS 10 with Android 10 are NEX 3 and NEX 3 5G. They will get the update on March 14. However, only 4,000 people will receive this, and they have to register first. In late March, the company will roll the update for X27 and X27 Pro. The next devices in the list are NEX S, NEX A, NEX A with an in-display fingerprint scanner, and NEX Dual Display. These devices will receive the update in early April. In mid-April, the update will arrive for the Vivo S5, while the Z5, Z5i, Z5x, S1 and S1 Pro will see it in late April. Unfortunately, owners of the Z3, Z3i, and X23 will have to wait until late June for some reason.

That’s pretty much the entire list of handsets getting Funtouch OS 10. At least, things seem to finally be moving in the right direction now. We hope the Vivo realizes soon how delivering faster updates is an important part in this whole competition.

Next Samsung shifts production of smartphones from South Korea to Vietnam