Counterpoint recently released the global smartphone market report for Q4 2019. According to it, Apple’s market share ranked first with 18%, followed by Samsung, Huawei, Xiaomi and VIVO.

Also Read: Global Smartphone Market Will Decline By 2.3% In 2020 Due To Coronavirus 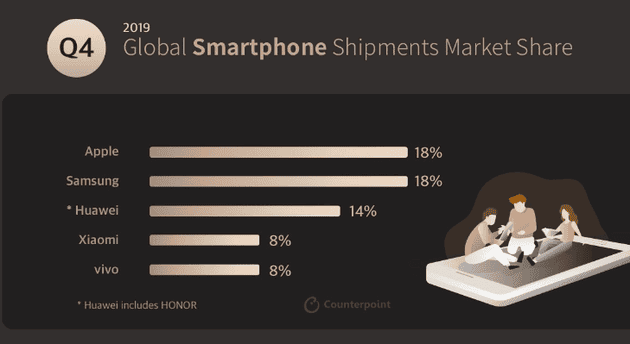 Specific to smartphone brands, Apple’s market share reached 18%, ranking first. Even without the introduction of 5G products, Apple’s shipments have increased by 10% year-on-year.

Samsung’s market share is 18%, and Samsung’s shipments in the fourth quarter of 2019 decreased by 1% year-on-year. But Samsung currently performs well in markets other than Asia. It ranks second with 20% in North America, first with 27% in Europe, first with 34% in Latin America, and in Middle East and Africa, it ranked first with a 20% share. 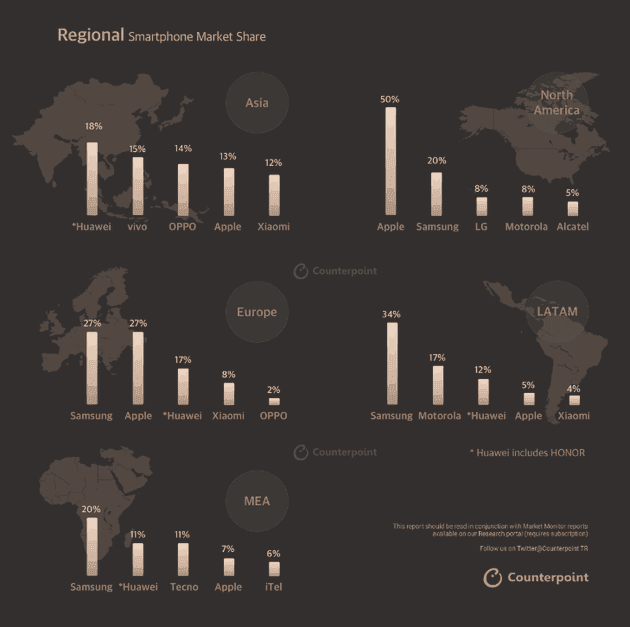 Xiaomi’s market share is 8%. Its shipments in China have fallen by 17% year-on-year. But Xiaomi’s global shipments have increased by 28% year-on-year due to its reduced dependence on the domestic market. As you know, Xiaomi is actively working on entering other markets.

VIVO has a market share of 8% and became the fifth largest brand in the fourth quarter of 2019. This is also the first time it has surpassed OPPO since the second quarter of 2015. VIVO has performed well in the Asian market, ranking second with 15% market share, second only to Huawei.