Samsung is working on its upcoming A-series smartphone dubbed Galaxy A41 and we’re already aware of that thanks to previous leaks and rumors. As the name suggests, the device is a successor to the previous Galaxy A40 smartphone. Recently, the device made its way to the GeekBench listing and now it has appeared on the Bluetooth SIG for certification. As expected, the listing has revealed some key information about the device. 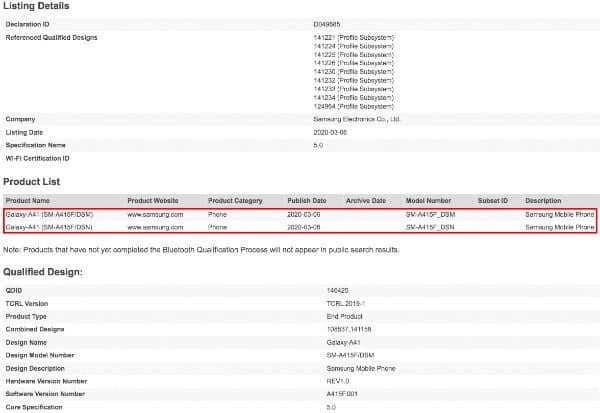 Yesterday. the Galaxy A41 smartphone managed to get its Bluetooth SIG certification. With the certification, the moniker for the phone has finally been confirmed. Furthermore, the device comes with Bluetooth 5.0 connectivity. Generally, the Bluetooth SIG listing doesn’t reveal much about the device.

Under the hood, the device runs on Helio P65 chipset paired with up to 128GB onboard memory. All of these are going to be backed by a 3,500mAh battery packed inside.

As of now, Samsung hasn’t announced any official launch date for the device. Since it has now made its way to the Bluetooth SIG listing, we can say that the launch is nearing.