According to official ROG Twitter, ASUS ROG gaming phone 2 will launch the Android 10 system upgrade starting today. After 4 months of testing, ASUS has finally launched the stable Android 10 update for ROG gaming phone 2. In addition to minor tweaks and fixes, Android 10 also has some more prominent features: a global dark mode theme, privacy enhancements for location permissions, and gesture operations. The system upgrade is currently rolling out OTA and it weighs a massive 1GB. Thus, you will have to ensure that you have enough data and storage space on your phone before you attempt to download the update. 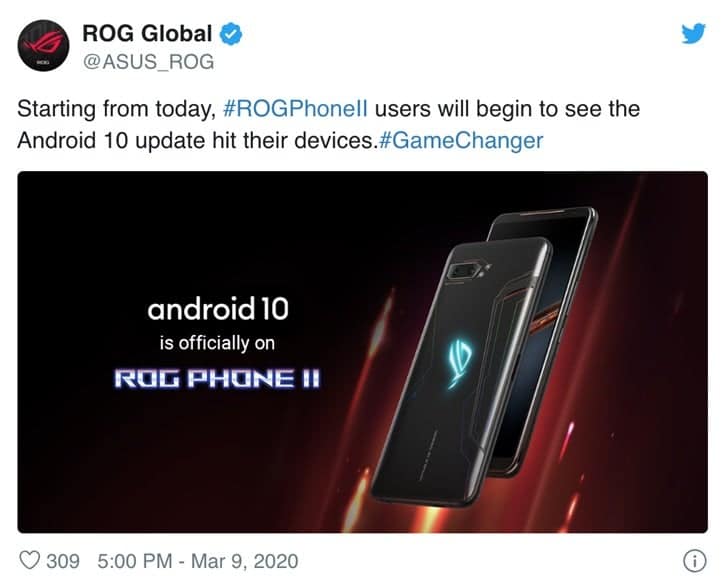 Presently, there are a plethora of gaming smartphones in the market. However, we can safely say that this smartphone is one of the most powerful. The ASUS ROG Gaming Phone 2 uses a 6.59-inch 2340×1080 resolution AMOLED screen. This display supports HDR 10, has a refresh rate of 120 Hz and a touch sampling rate of 240 Hz.

As said, under the hood, it carries a Snapdragon 855 Plus processor. This phone comes with up to 12GB of RAM and up to 512GB of UFS 3.0 storage. It also uses a 6000 mAh large-capacity battery which supports QC4.0 fast charge and external clip cooler.

In terms of camera, the ASUS ROG Phone 2 sports a 24MP front camera and dual rear camera. The latter consists of a 48-megapixel Sony IMX586 sensor and a 13-megapixel 125-degree super-wide-angle sensor.

Next Unofficial WhatsApp apps are gaining massive popularity in some regions