Samsung is working on its next 2020 iteration of the budget smartphone dubbed Galaxy M21. The device has already been a part of numerous leaks in the past. After making its way to the GeekBench listing, we now have the very first promotional poster of the device. The teaser image reveals some aspects of the device along with the launch date. 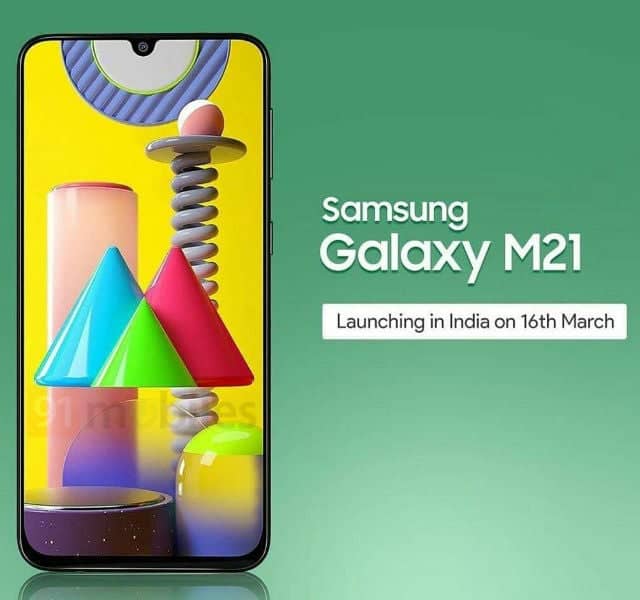 It is worth mentioning that this is the first time we are looking at the design of the Galaxy M21 smartphone. As you can see from the poster image, the design looks similar to that of previous Galaxy M- and Galaxy A-devices. The M21 will come with an Infinity-U display that means it has a U-shaped notch that houses the selfie camera. For those who’re unaware, the predecessor comes with a V-shaped notch.

Furthermore, you can see very thin bezels on the side along with relatively sizeable chin at the bottom. The images have also revealed the placement of the buttons. You can see the volume rocker and power button on the right side. Sadly, the rear design of the device still remains unknown. With that said, the poster has also reiterated the launch date of the phone. The smartphone will see its first official unveiling on March 16 in India.

Looking at the previous leaks and rumors, Samsung Galaxy M21 will come with a 6.4-inch AMOLED panel with a Full HD+ resolution. Under the hood, the device will run on Exynos 9611 SoC paired with up to  6GB RAM and up to 128GB storage. As expected, the internal memory will be expandable via an external microSD slot.

For optics, there is a triple camera module at the back that consists of a 48MP primary sensor, an 8MP ultrawide lens, and a 5MP depth sensor. There is going to be a 16MP selfie snapper on the front for selfies and video calling. All of these are going to be backed by a massive 6,000mah battery packed inside.

Previous Coronavirus: Here's How You Can Skip Pre-Recorded Awareness Message (For Indian Readers)

Next Here is the price of the upcoming Huawei P40