While we wait for the Samsung Galaxy S20 series to launch in mid February, the Korean phone maker – Samsung – appears to be busy in flooding to the market with more affordable handsets. This time it was the turn of the Samsung Galaxy M21; the successor of the Galaxy M20 launched in January of 2019. 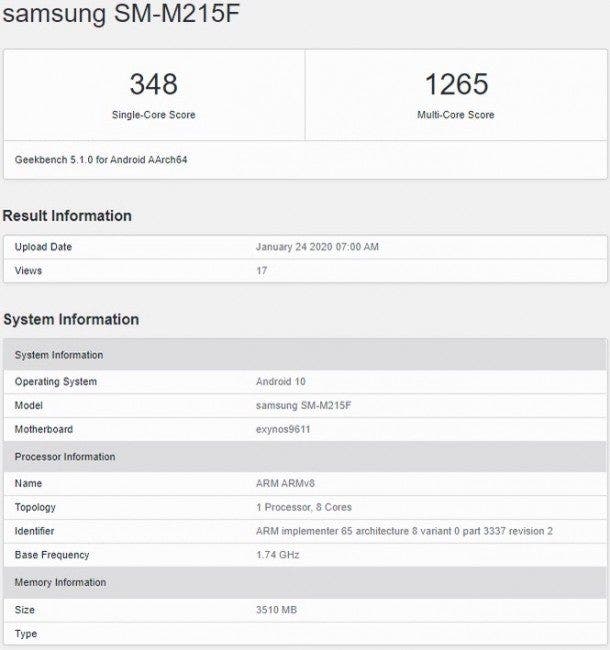 A smartphone with model number SM-M21F did indeed just pop up on the famous benchmark platform GeekBench; with reports suggesting we’re looking at the Galaxy M21. The device managed to score 348 points in single core more and 1265 multi core mode on GeekBench version 5.1.0. From the benchmark we can also see the smartphone is powered by a Samsung Exynos 9611 SoC coupled with 4GB of RAM.

As always, we don’t get to know much more from a GeekBench score, but we can assume the device will be available with either 64GB or 128GB of internal storage. Meanwhile in the camera department we should find a minimum of two rear cameras (the M20 had two); but Samsung could surprise us by adding a third sensor. Additionally, the smartphone should also feature a fingerprint scanner on the back.

Finally, the Samsung Galaxy M21 is expected to come in three color variants: Blue, Black and Green. We still aren’t aware when the smartphone will hit the market, but given the fact that the predecessor was launched in January of 2019, we can assume it’ll be the same for the new Galaxy M21; February the latest.

Previous PlayStation 5: is this the first real photo of the console?