Chinese manufacturer, Meizu, has not really been consistent in recent times due to multiple issues with its smartphone business. After the release of the Meizu 16 series back in 2018, the company is now set to unveil the Meizu 17. There is already an official announcement that the Meizu 17 is coming. However, we now have a real image, price information, and specs of this device. 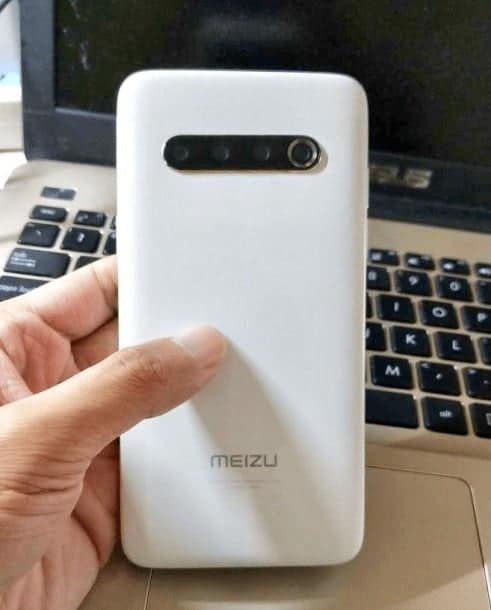 There is currently a real image of the Meizu 17 (allegedly) circulating on the Internet. Meizu loves its white colour so its no surprise that this device has a white appearance. On the rear, we can see that this smartphone comes with four sensor slots. The four slots are horizontal and one of the camera sensors uses the ring flash design. This is quite different from earlier information which claims that Meizu is set to dump the ring flash design. We have the Meizu logo and other information at the bottom of this device. There is no rear fingerprint sensor thus it should use an on-screen or a side fingerprint sensor.

According to recent information, the Meizu 17 will use a 6.5-inch 90Hz OLED curved screen The display uses a center punch-hole that houses the selfie camera. This device will come with a 64MP main camera coupled with a 20MP wide-angle camera and a 12MP telephoto lens. The main camera is a Sony IMX686 sensor. Under the hood, we have a Snapdragon 865 processor + LPDDR5 + UFS 3.0 solution.  Of course, this device will support 5G dual SA / NSA network. There are also reports that this smartphone will support Wi-Fi 6. On the battery end, we have a 4500 mAh that supports a 30W wired fast charge.