Last month, we reported that POCO is working on its own iteration of truly wireless earbuds. Although we don’t have the official moniker, we’ll be calling it POCO TWS earbuds for the sake of ease. Earlier today, the smartphone maker officially confirmed the existence of its truly wireless earphones. Furthermore, the brand hinted at the Indian launch as well. 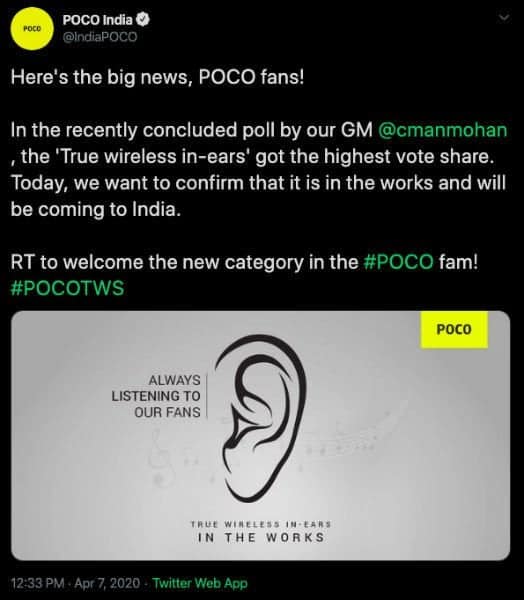 POCO India today posted on its official Twitter account talking about the truly wireless earbuds from the brand. It also mentions that the TWS earbuds received the highest vote share in their previously conducted survey. For those who’re unaware, POCO’s General Manager C Manmohan recently created a survey poll on Twitter. The poll asked fans which tech product the company should focus on next apart from smartphones of course.

Well, it seems like the company has listened to its fans since it has confirmed the existence of POCO TWS earbuds. Sadly, there is no solid information on the launch timeline but we should expect the same surfacing in the coming months.

With the upcoming TWS earbuds, Xiaomi’s sub-brand will directly compete with the Realme Buds Air. Considering Realme’s offering doing pretty well, POCO might also be looking to expand its portfolio in the same segment. With that said, we should expect some aggressive pricing once the product goes official.

Apart from the POCO TWS earbuds, the company is also working on the true successor of F1 – dubbed POCO F2. Furthermore, it even clarified that the upcoming phone is not going to be some rebranded K30 Pro.

Next Galaxy Fold 2: Samsung will lower the starting price of its foldable smartphone