Oppo is gearing to launch a new smartphone for its reno series dubbed Oppo Reno Ace 2. The device will go official as soon as the next Monday, April 13. We’ve been seeing a couple of leaks during the latest week confirming some of the smartphone specifications and key aspects of its design. Today we got a new video clip where the phone’s battery is put on stress. Along with it, we have the leaked prices of the highly-anticipated smartphone.

According to the leaks, the Oppo Reno Ace 2 will debut with a 4,000mAh battery. This battery shouldn’t be so impressive considering that there are several smartphones nowadays crossing the 4,500mAh and 5,000mAh barrier. However, the smartphone will come with an impressive 65W wired charging and 40W wireless charging support. So, even if you get out of juice, the stock charger will take just a few minutes to replenish this battery.

On the above teaser, the phone scored an impressive 7 hours and 47 minutes of intense gaming before dying. That’s quite impressive since games usually are stressful tasks for the whole hardware. When it comes to the video playback test, the handset crossed the 12 hours and 19 minutes mark.

Besides the leaked battery, we got some pricing info straight from the reliable Ice Universe. According to him, the Reno Ace 2 will retail at CNY 4,399 (~$620 / €570). Apparently, this price stands for the variant with 8GB of RAM and 128GB. It also represents a major price hike over the last year’s Reno Ace which came with a $422. 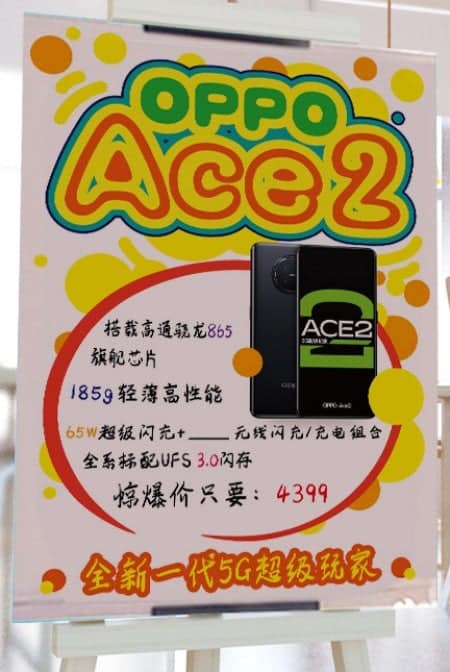 The new Reno Ace 2 boasts Snapdragon 865+, has a massive 6.5-inch OLED display with a punch-hole selfie camera. On the back, there’s a Quad-camera setup led by a 48MP Sony shooter. According to reports, besides the new smartphone, Oppo will also reveal a new 40W AirVOOC Wireless charger.

We believe that more details will keep popping out in the coming days ahead of the release. So stay tuned.