In the face of the new coronavirus pandemic, some seemingly unnecessary items automatically became valuable. One of such item is a PC or tablet. How did the COVID-19 make a PC or tablet valuable? Many nations around the world are currently on lockdown and everybody is either schooling or working from home. A smartphone display is too small for such thus the need for larger displays. According to Canalys, compared PC shipment for Q1 2020 fell by 8% YoY. This is the largest decline since 2016, despite the surge in demand. 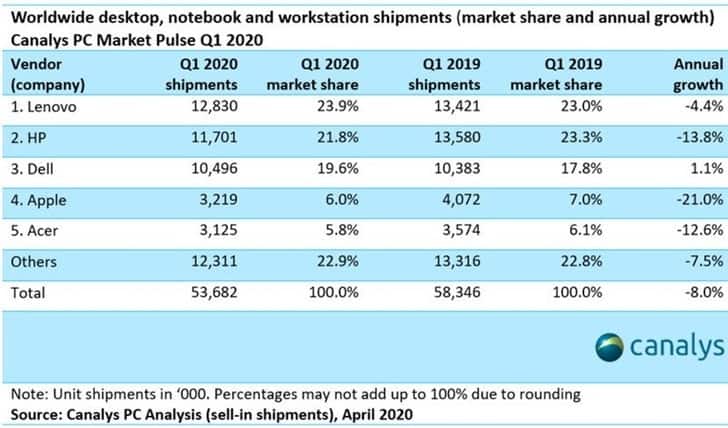 The COVID-19 pandemic is responsible for Global PC high demand

As more workers and students began to work / school from home, PC manufacturers saw demand “surging” in the first quarter. However, restrictions in the supply chain have led to a decline in shipments.

Canalys research director Rushabh Doshi said: “The global COVID-19 outbreak is actually promoting the development of the PC industry. However, due to insufficient transition to the 10nm node, PC manufacturers faced tight supply constraints of Intel processors in early 2020. Just after the Chinese New Year, the situation worsened when the Chinese factory could not re-open”.

For the second quarter, Canalys speculates that such demand growth may not remain stable. Canalys analyst Ishan Dutt said: “Few companies will invest in PC technology, and companies that are willing to invest have also purchased new equipment…The global economic recession has begun and companies will go bankrupt…”

The table above shows the details of global PC shipments for the first quarter of 2020. In Q1 2020, the ranking of PC manufacturers remained relatively unchanged, and Lenovo once again topped the list with 12.8 million units shipped. Hewlett-Packard and Dell followed closely, with shipments of 11.7 million and 10.5 million, respectively. According to Canalys, Apple had the largest decline, with shipments falling by 20% to 3.2 million units.

What do you think about the global PC shipment? Will it rebound in the second quarter of 2020? Let us know your thoughts in the comment section below.