Motorola will finally introduce its new flagship dubbed Motorola Edge+ in the next week, and along with it we also expect a vanilla Motorola Edge. This latter device will sit on the upper mid-range segment, being cheaper than its sibling and also offering 5G connectivity. We already saw the handset’s back thanks to a leaked image, now, we have the specifications confirmed by Google Play Console. 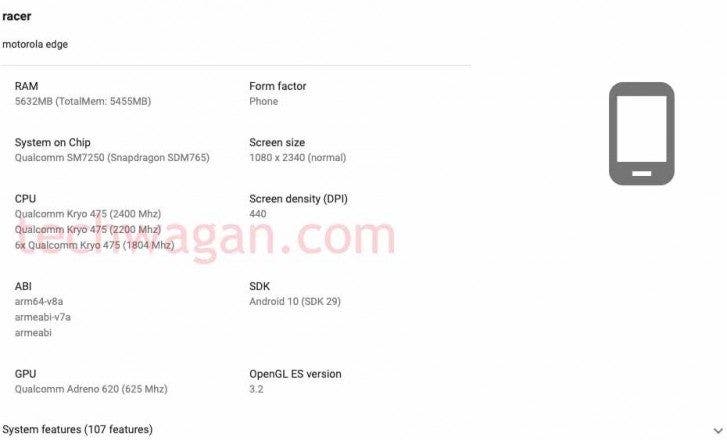 Under the hood, the Motorola Edge will boast Qualcomm’s mid-range offering with an integrated 5G modem, the Snapdragon 765G. The processor comes along with 6GB of RAM and presumably 128GB of internal storage. The listing reveals a FullHD+ display, which we know it’s a 6.6-inch panel, and Android 10. Talking again about the display, it will come with a 90Hz refresh rate just like the flagship variant. There’s a single punch hole in the top-left corner housing a 25MP selfie snapper.

The camera department is composed of a 64MP main, 16MP ultra-wide and 8MP telephoto units. There’s a fourth hole in the vertical setup comprising a laser auto-focus. We also have an in-display fingerprint scanner and a 4,500mAh battery in tow.

We are curious to see how Motorola will price this smartphone, but we believe it will be disappointingly more expensive than other mid-range smartphones. Especially, when the bigger difference here will be the chipset and the cameras. Both the Motorola Edge and Edge+ will be revealed on April 22 that is just a few days from now.

Next Nubia Play 5G camera details surface along with some samples