Ever since Xiaomi officially discontinued the development of MIUI 11, there have been a long list of speculations regarding the MIUI 12 UI. Xiaomi’s MIUI is easily one of the most popular and most successful custom Android skins. We’re starting to see ColorOS 7.0 becoming relevant, but MIUI still stands as the most popular thanks to a huge community with active support. An official Weibo post shows that the MIUI 12 will support Vientiane Screen and its AOD (Always-On-Display) supports non-linear animations. 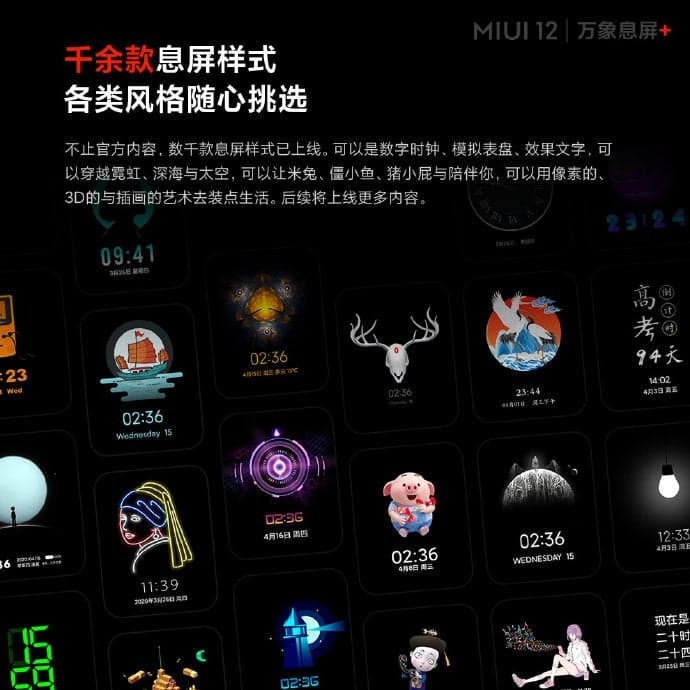 According to the official MIUI introduction, the screen is based on the capabilities of the MAML changeable framework. The system can now achieve more creativity: non-linear animation, different visuals depending on the weather, time conditions or randomly. Furthermore, Xiaomi promises that it has over 1000 third-party animated AOD styles.

This is quite an improvement on what MIUI 11 has. Presently, AOD is not dynamic for third-party styles. They neither support time nor weather. However, with the latest version, MIUI is adding these features.

MIUI 12 will officially arrive on April 27

Xiaomi will hold the Xiaomi Mi 10 Lite and MIUI 12 press conference at 2 pm on April 27th. In addition to non-linear animations AOD animations, MIUI 12 will also support a system-wide dark mode 2.0. This dark mode has a deeper impact than the current version.

One of the most notable features of Dark Mode 2.0 is the smart wallpaper dimming feature. The most interesting bit about this new feature is that it will try to smartly adjust the wallpaper in a way that simulates the light transitions during the day cycle.