Yesterday, Chinese manufacturing giant, Xiaomi, announced that the Xiaomi Mi 10 Lite 5G will be released on April 27 alongside the MIUI 12 system. Now, we are getting more official information regarding this smartphone. The company announced the colour options today. The Xiaomi Mi 10 Lite will be available in pink (peach), orange (storm), green (tea) and blue (berry). 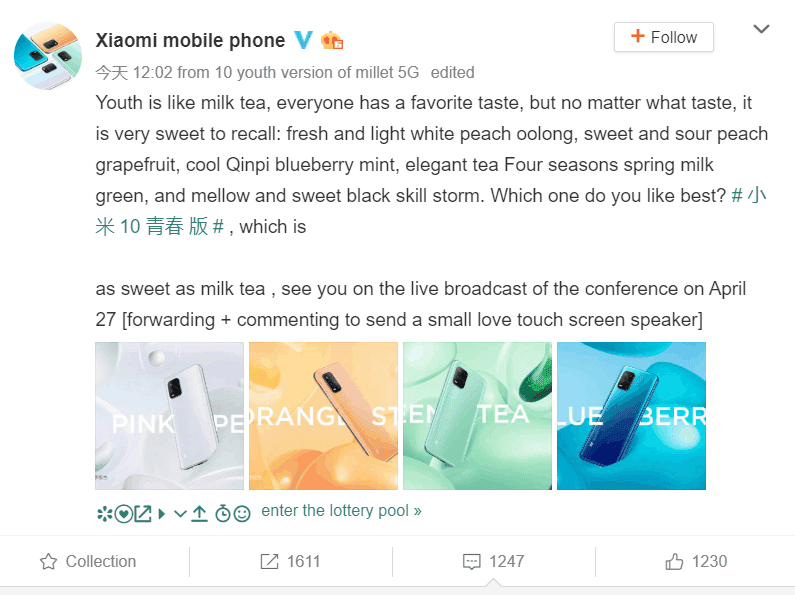 For Xiaomi, the Mi 10 Lite is for the younger folks and perhaps females. This category of people does no appreciate the regular black or white colours. Like we already know, this smartphone comes with a quad-rear camera setup which is slightly convex.

The Xiaomi Mi 10 Lite 5G features a periscope sensor that will allow the camera to support 50x zoom. This feature is also available with the regular Xiaomi Mi 10. The European version of this smartphone does not feature a periscope camera. The camera label also shows that the device features AI-based camera improvements.

This device comes with a 349 euros price tag in Europe. With the advancement in the camera setup, the price will obviously change in China. The Mi 10 Lite 5G will probably be cheaper in China. According to a report by Pricebaba, the Xiaomi Mi 10 Lite 5G would debut in four variants; 6GB + 64GB, 6GB + 128GB, 8GB + 128GB, and 8GB + 256GB. The device is also expected to come in more color options compared to the European version. Keep a tab with us and we will give you first-hand information when this device eventually arrives.