The coronavirus pandemic has a huge effect on the global smartphone market. According to IDC, the global smartphone shipments fell 11.7% year-on-year in the first quarter of 2020. However, Samsung (1st), Huawei (2nd), and Apple (3rd) still manage to retain their positions with 21.1%, 17.8%, and 13.3% market share respectively. 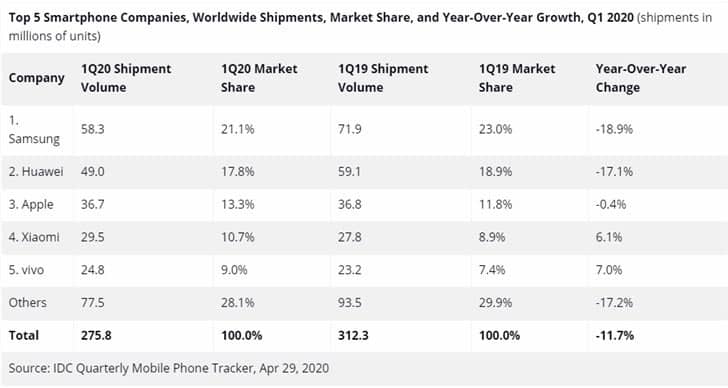 In the fourth position is Xiaomi with a 10.7% market share while Vivo returned to the top five smartphone manufacturer list with a 9% market share. Its year-on-year growth is 7.0% and it has the highest annual growth rate among the top five. Recall that Vivo recently overtook Samsung as the second-largest smartphone manufacturer in India. IDC believes that its performance in the Indian market is behind its global sale success. Vivo’s mid-range series (Y and S series) has been doing quite well in India.

India is the second-largest smartphone market behind only China, thus it has a fair impact on the global market. While Samsung, Huawei, and Apple all retained their positions, they all recorded a decline year-on-year. Samsung and Huawei were the most hit with 18.9% and 17.1% decline respectively. On the other hand, Apple’s record only shows a slight (0.4%) decline while Xiaomi recorded a 6.1% increase.

Canalys, another reputable market research firm also released its report on the global smartphone shipments for Q1 2020. It’s top 5 ranking is identical to IDC’s report. Among the top 5 companies, only Xiaomi and Vivo recorded an increase year-on-year. 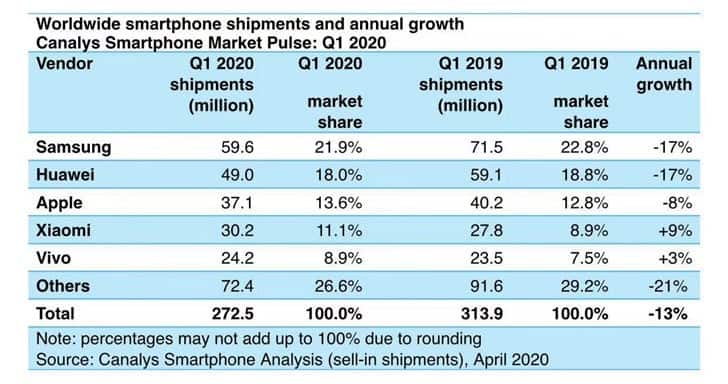 Canalys report shows that global smartphone shipments fell by 13% in the first quarter of this year due to the impact of the coronavirus. Also, Chinese manufacturer, Vivo, rose to the top 5 and its global shipment increased by 3% Year-on-year.