Recently, more and more information has appeared regarding the new affordable smartphone from Google, namely the Pixel 4a. Previously, the alleged design and cost of the device appeared on the Web, and now, the confirmed technical characteristics of the new product have become known.

Thanks to the information in the GeekBench v4 test databases, its performance results and some device specifications became known. In particular, information was confirmed that the smartphone will receive Android 10 out of the box, 6 GB of RAM and the Qualcomm Snapdragon 730 chip with a maximum core frequency of up to 1.8 GHz. As expected, the smartphone will not support 5G.

Google Pixel 4a appears on GeekBench

The primary test showed the following results. In single-core and multi-core modes, the Pixel 4a scored 2529 points and 6366 points, respectively. Unfortunately, we have no more details from GeekBench. 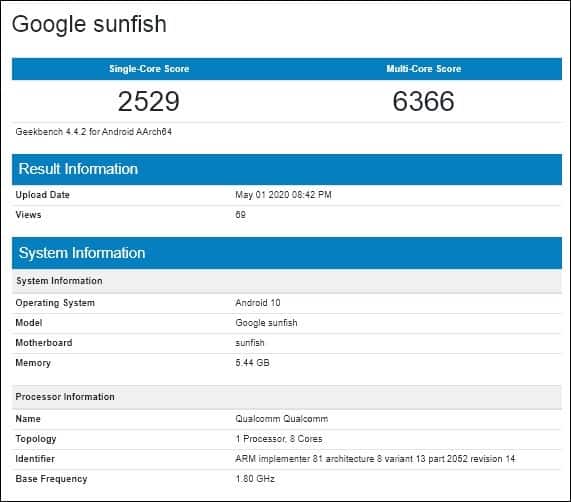 According to preliminary information, the device will receive a 5.81 inch OLED display with a resolution of 2340 × 1080 (FullHD +). The front camera is located in the form of a round hole in the upper left corner. The battery capacity should be 3080 mAh with support for 18 W fast charging.

Despite the OLED matrix, the fingerprint scanner will be located traditionally for Pixel devices on the rear panel. Also, the smartphone will receive a 3.5 mm audio jack and USB Type-C. The sales should start from May 22, the price of the new smartphone is likely to start from $399. With this price, it will be a  direct competitor of the iPhone SE 2020.

Recall that recently, the first camera samples taken by the  Pixel 4a are leaked. It shows that the smartphone will have a great camera as always with this smartphone lineup.