Two months after the successful launch of the Galaxy Buds+, Samsung is clearly preparing for the next headset. After applying for patents in the EU and the UK, the upcoming Galaxy BudsX has entered the US trademark application process. The upcoming Samsung Galaxy BudsX has a unique “bean shape”. However, there are reports that this device will also sell as a fitness headset. 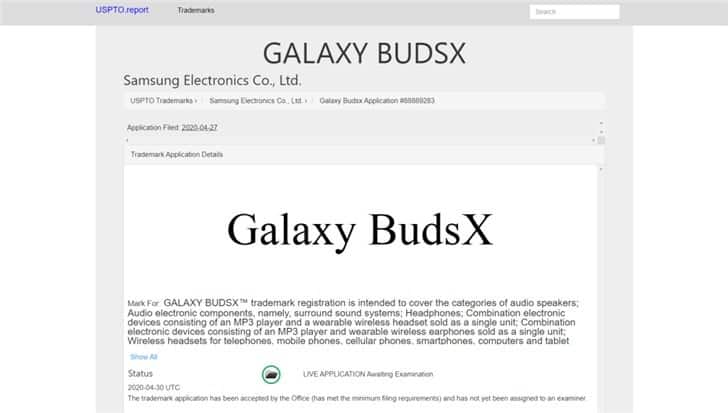 As shown in the figure above, the trademark application includes the words ” MP3 player and wearable wireless headset sold as a unit“. This may mean that we can expect the BudsX to support independent audio playback. If that is the case, the device will certainly need storage for songs, audiobooks, or podcasts.

Samsung Galaxy BudsX will be useful to sportsmen

This function will be very useful for runners or cyclists who do not want to always hold a mobile phone. In fact, we already know that this headset may have built-in software to track position and movement statistics (such as distance and calories). Thus, this device can be a true all-in-one fitness partner. Of course, you still need to use a mobile phone to answer the call, but at least you can reduce the need for data connections that rely on the phone.

Samsung’s Galaxy Buds+ has gotten a lot of positive reviews. Obviously, with the fierce competition from Apple, Google, and other companies, the South Korean technology giant is trying to win a place for itself.

Next Google Pixel 4a appears on GeekBench: the launch may be near