Xiaomi launched the latest version of its Android skin, MIUI 12, last week. The company has already released multiple closed beta builds in China. Now, Xiaomi.EU has reworked on these China builds and has released beta builds for global users.

Xiaomi’s latest and greatest MIUI generally sees the light of day first in China. The company then goes on to release several beta builds before a stable roll-out. The Chinese MIUI version supports only Mandarin and English languages. It also lacks Google apps and comes with Chinese bloatware that is really of no use elsewhere, globally.

Xiaomi’s EU team has given global users a chance to experience the new UI, by adding more languages to the build. It has also removed the Chinese bloatware and added Google apps so that users can enjoy the latest UI in their daily drivers.

The latest build by Xiaomi EU is available for 28 devices as of now with more unlocked features hidden by Xiaomi, so that users can experience the new MIUI 12 features that include an improved Dark Mode 2.0, new layout changes, improved privacy(in partnership with MACE), a new Control Center and more.

Below is a chart released by Xiaomi EU that includes the list of supported devices for the latest MIUI 12 build: 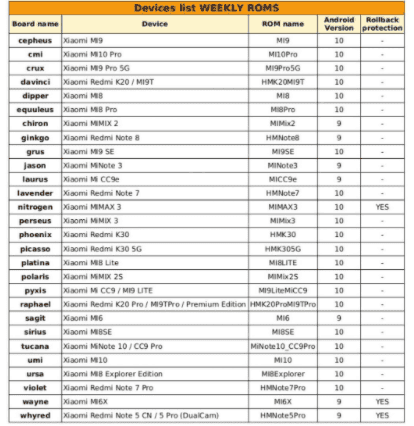