According to the latest research from Strategy Analytics, global smartphone shipments in the first quarter of 2020 were 275 million units, down 17% year-on-year. This is the worst quarterly performance in the history of the smartphone industry. In terms of global smartphone market share, Samsung maintained its number one position at 21%, Huawei ranks second at 18%, while Apple ranks third with 14%. 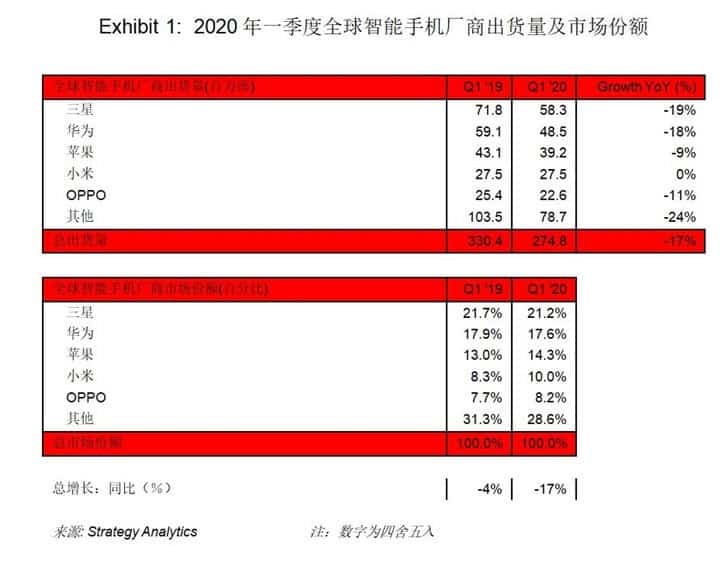 In the first quarter of 2019, smartphone shipment was about 330.4 million. Now, we have just about 275 million which is the worst performance ever. This is not exactly a surprise because the coronavirus pandemic caused China and other major markets in the world to shut down.

Although Samsung retained its top position, it is the most hit of the top 5 companies. Its Q1 2020 shipment of 58.3 million is a 19% decline from the 71.8 million units in the first quarter of 2019. For the South Korean giant, this is the lowest in eight years.

Chinese Manufacturing giant, Huawei, is at second spot despite its troubles and the Covid-19 effect.  In Q1 2020, it shipped 48.5 million smartphones, an 18% decline from Q1 2019. China is still the core region of Huawei, and most of its sales are in this region.

For Apple, it sits comfortably in the third position with 43.1 million shipments in Q1 2020. This is a 9% decline from its Q1 2019 performance. However, its market share rose from 13% last year to 14%. For a while now, Apple has been using the “price cut” marketing strategy. This seems to be working for the company and it will have greater influence in emerging markets such as India. Analysts expect its sales to increase in the coming months.

Xiaomi is in the fourth position with 27.5 million shipments in Q1 2020. Many thanks to its strong grip on the Indian smartphone market which is the second largest in the world.

Oppo maintains its fifth place with 8% of the global smartphone market share in the first quarter of the year. The company relied on its high-end Reno models to expand into Western Europe and other regions.