As the coronavirus pandemic continues to spread, the productivity of many industries continues to decline. However, with many people staying at home, the software market is not expected to experience any decline. If anything, there should be an increase. Nevertheless, Netmarketshare, a statistical survey agency, reported a surprising result for April 2020. According to the agency, the global share of Microsoft Windows 10 has decreased relative to the data in March 2020, falling to 56%. In addition,  the global share of Linux and macOS systems has increased.

In response, Microsoft denies the claim saying that Windows’ share did not only increase, its usability has also significantly increased by 75% year-on-year. This is equivalent to 4 trillion minutes per month for Windows users. Technically, an increase in the usage of Windows is what we expect.

Of course, when everyone stays at home, the use of large screens will increase over mobile screens. Statcounter chart data shows that the market share of Windows and macOS has risen in recent weeks… However, the market share of Android and iOS has slightly declined. 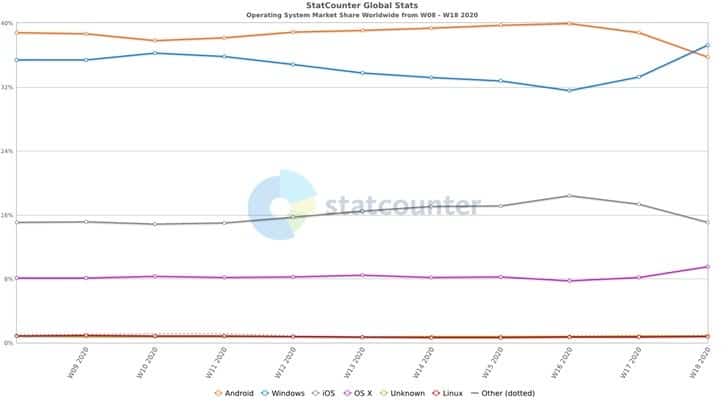 Microsoft also reported in its latest financial report that PC demand has driven Windows OEM Pro revenue growth by 5% due to the need for remote work and learning.

Microsoft Windows 10 update for May 2020 will come late

It looks like everyone will have to be patient if they want to install the new Microsoft’s Win10 2004 (May 2020 update) via Windows Update. According to the latest information, the official date has now been postponed to the end of May. A possible zero-day exploit must first be patched before the new Windows 10 can be released to the developers and manufacturers. Microsoft’s schedule seems to have a delay by a few days, but a release in May is still in the plan.

The original speculation claims that the May 2020 update would arrive on May 12. However, there is a new report that this will not happen, we will now get this update on May 28th. The reason is supposed to be a zero-day exploit, which Microsoft wants to fix before release.

According to the new timelines, Windows 10 version 2004 will now be available to consumers on May 28, 2020. In addition, the update will be available for OEMs on May 5.