On May 6, the latest report released by IDC showed that in the first quarter of 2020, China’s smartphone market shipped approximately 66.6 million units, a year-on-year decrease of 20.3%.

IDC believes that due to the impact of the ‘new coronavirus’ epidemic, although China’s smartphone market dropped significantly in the first quarter, the overall performance, in the end, was better than expected. 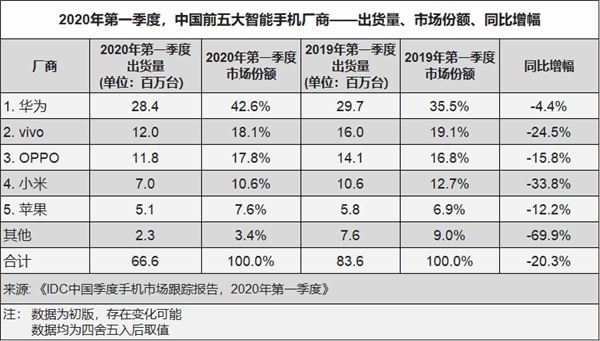 In early March, the early price adjustment of flagship products and the online promotion of the Honor brand also smoothly catered for the release of terminal consumer demand after the epidemic gradually grew. It has driven Huawei’s overall market share to continue to climb to a record high.

Other Players In China’s Smartphone Market

VIVO relies on rich online product line coverage. And its online channel market performed stably during the epidemic. In addition to continuing to focus on the online market, the iQOO and Z series new products launched in the market in February and March also quickly covered its 5G products to a wider price segment and user group.

OPPO continues to maintain its third position. And the decline has narrowed compared to the second half of 2019. In the first quarter, the market performance of the Reno 3 series products was stable. It helped OPPO to consolidate the performance of the mid-to-high-end price 5G market.

Xiaomi was limited by the impact of the epidemic on the supply chain capacity and the low inventory level. So it caused a certain shortage during the first half of the first quarter and affected its overall performance. In the second half of the first quarter, through Xiaomi and Redmi flagship new products, there are more obvious differences in product experience and user positioning. Jointly they cover the price segment of more than 3,000 yuan, striving to impact the high-end market. In addition to product configuration strength, the future development of Xiaomi in the high-end market will require continuous attention to high-end users and channels, and long-term demands and operations.

Apple is affected by the epidemic. And the related supply chain has suffered more than other China-based Android-oriented manufacturers. On the retail side, Apple’s direct-operated store channels account for a greater proportion than other Chinese Android manufacturers. The closure of stores during the epidemic has further affected Apple’s market performance. In the first quarter, Apple shipped approximately 5.1 million units domestically.