An unknown smartphone called Xiaomi Mi 10E has appeared in the database of the popular Geekbench benchmark portal, about which absolutely nothing was known until then.

The Geekbench database confirms that the new product is equipped with a single-chip Samsung Exynos 990 SoC, 8 GB of RAM and runs on the Android 10 operating system.

In single-threaded mode, the new product scored 913 points, and when using all the cores of the Samsung Exynos 990 single-chip system, the result was 2755 points.

If nothing seemed strange to you, then let’s repeat it again. The new version of Xiaomi Mi 10 based on Exynos 990 has already been tested in the popular benchmark. The only question is why Xiaomi used the new version of Exynos 990, which is inferior not only to the flagship Snapdragon 865 platform, but in some cases to the much cheaper MediaTek Helio G90T. 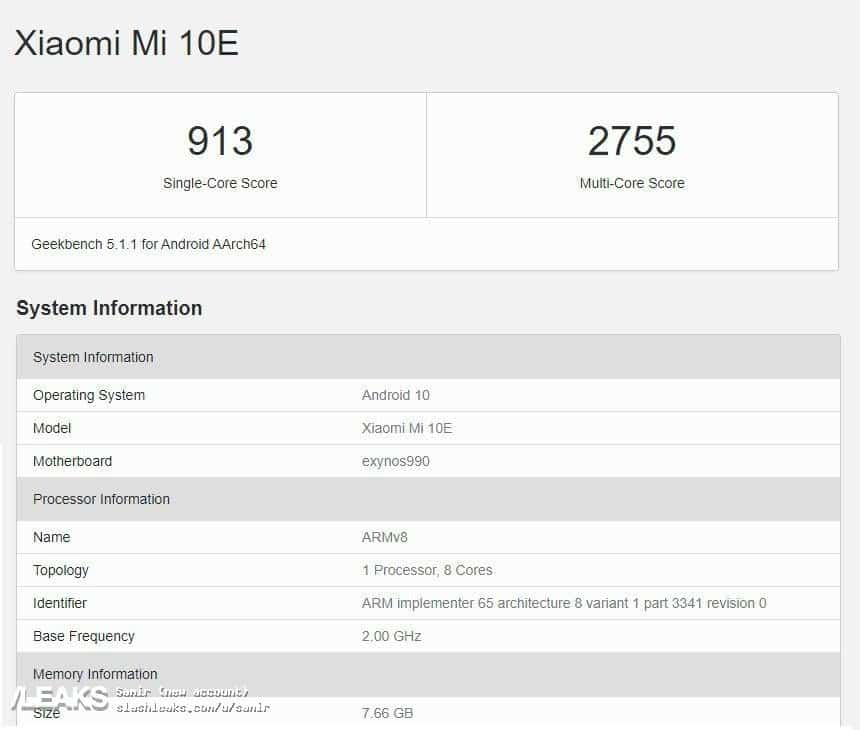 Samsung has been using the latest Exynos and Qualcomm Snapdragon platforms for its flagships for a long time. This is usually because there is a shortage on the market at the time of the release of the new SoC Snapdragon due to the increased demand. Now several months have passed after the Snapdragon 865 appeared on the market. And this platform is used in a huge number of different smartphones.

Due to the use of RDNA GPU, the running score of the Exynos 1000 is very good. In Manhattan 3.1, it got a score of 181FPX. It is almost 50% higher than the Adreno 650 GPU of the Snapdragon 865. We should also take into account that this is only the smallest test item.

Previous Android: Google fixes 39 vulnerabilities with the May 2020 patch