AnTuTu benchmark has published the list of top 10 most powerful Android phones in April 2020, which showed several important trends. So, all ten of the best smartphones are built on Snapdragon 865. While five representatives on the list are equipped with 8 and the five others have 12 GB of RAM. More interestingly, the top ten most powerful smartphones were representatives of only two companies – BBK and Xiaomi. The BBK empire includes leaders – Oppo X2 Pro, Oppo X2 and Vivo IQOO Neo 3. Also, there is Oppo Reno Ace 2, iQOO 3, Realme X50 Pro and Vivo NEX 3S. Well, Xiaomi is represented only by models Mi 10 Pro (fourth place), Redmi K30 Pro (sixth place) and Black Shark 3 Pro (tenth position). 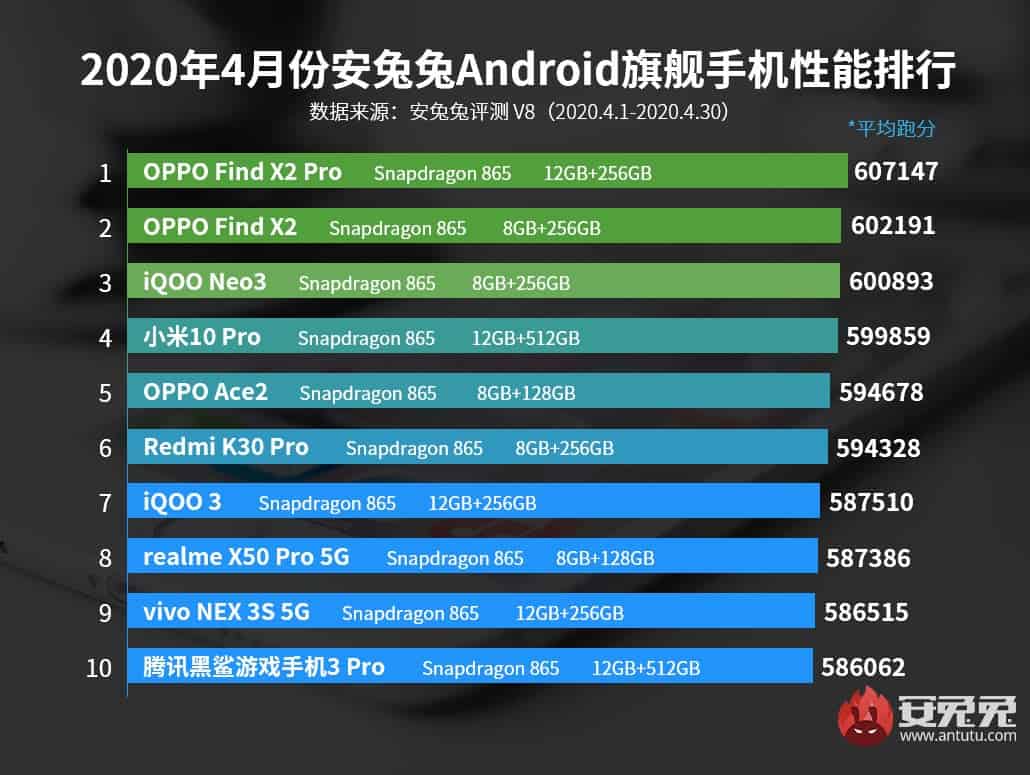 The ranking of the most efficient April flagships by AnTuTu is not very diverse. Because it basically consists only of Chinese devices. It should be noted that all smartphones that caught up to the strongest ten operate under the control of the latest Snapdragon 865. Oppo Find X2 Pro came first with 12 GB RAM, followed by “regular” Find X2. The podium closed by the iQOO Neo3.

Fourth, fifth and sixth places belong to the Xiaomi Mi 10 Pro, Oppo Ace 2 and Redmi K30 Pro respectively. The final four places are occupied by smartphones such as iQOO 3, realme X50 Pro 5G, Vivo NEX 3S 5G and Xiaomi Black Shark 3 Pro. It is strange that the list did not include any of the representatives of the Samsung Galaxy S20 family. The lack of the OnePlus 8 family is understandable (OnePlus is also, by the way, belongs to BBK). Because it debuted in mid-April and will most likely take someplace in the AnTuTu statement dated May. Have your devices found on the list of the most powerful flagships of April? Let me know in the comments!

Previous Fortnite has 350 million players: it is one of the most popular titles ever

Next Meizu 17 pricing leaks ahead of the launch