Realme launched its first flagship of the year Realme X50 Pro 5G back in February. Now, a new tip has revealed that the company may be working on a phone with Snapdragon 865 SoC and could debut in the first half of the year. This could possibly be a gaming device or just another high-end handset from the smartphone maker.

Going into the details, popular tipster Ice Universe has posted the supposed Antutu Score of the device on Weibo. The post reveals the score with CPU and GPU scores. The codename of the device is shown as RMX2072. If we recall, the earlier launched X50 Pro 5G’s codename was RMX2071. 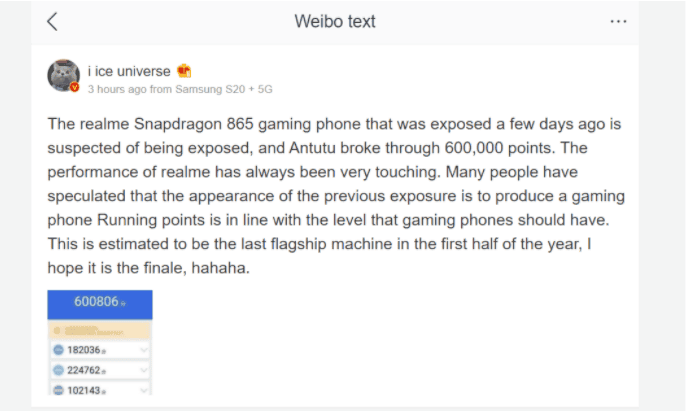 Further, the tipster says that the phone could arrive during the first half of the year. However, there is no information regarding the specifications of the device and we will have to wait for further leaks. Apart from this, Realme is also prepping for the launch of Realme X3 Super Zoom, which is expected to come anytime now.