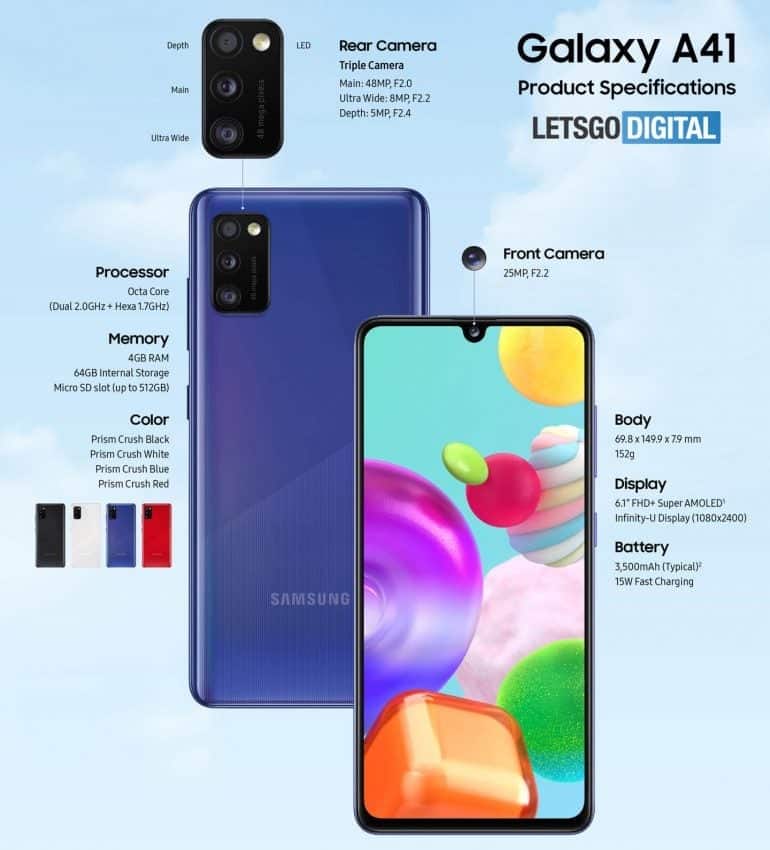 The Samsung Galaxy A41 comes with numerous upgrades relative to the 2019 Galaxy A40. This smartphone uses a MediaTek Helio P65 processor with 4GB RAM + 64GB ROM. It also comes with a 6.1-inch AMOLED screen with Full HD+ resolution as well as an on-screen fingerprint sensor.

Thanks to the integration of a wide and ultra-wide-angle lens, you can take a variety of images, from portraits to landscape photos, with this phone. The Galaxy A41 is IP68 certified and has good dust and water resistance. In particular, it’s waterproof, claiming to stay watertight for half an hour under 1.5 meters.

The Galaxy A41 phone runs the Android 10 operating system and incorporates the OneUI 2.0 user interface. It has a built-in 3500mAh battery, which 400 mAh more than the Galaxy A40’s 3100 mAh battery. The 3500 mAh battery has no problems with a normal day use, and the Samsung Galaxy A41 also supports fast charging with a maximum payload of 18W.

The Samsung Galaxy A41 will be available in the Netherlands on May 25, 2020, in three colors: black, white, and blue. In terms of asking price, rumors claim that this device will sell for €300.