After many rumors and leaks, it’s official the Honor X10 and X10 Pro are coming in the next week. Interestingly enough, Honor decided to publish some photo samples ahead of the launch. Despite the images, there’s still missing details about the camera setup. Thanks to a new leak on Weibo, we can have an insight in the camera’s specifications of the vanilla and Pro variants.

The new Honor X10 will feature a 40MP Sony IMX600y custom sensor that comes along with an RYYB filter. The camera array is joined by an 8MP ultrawide module and a 2MP macro module. The Honor X10 Pro 5G has an additional periscope camera with an 8MP resolution that offers up to 5x optical zoom. 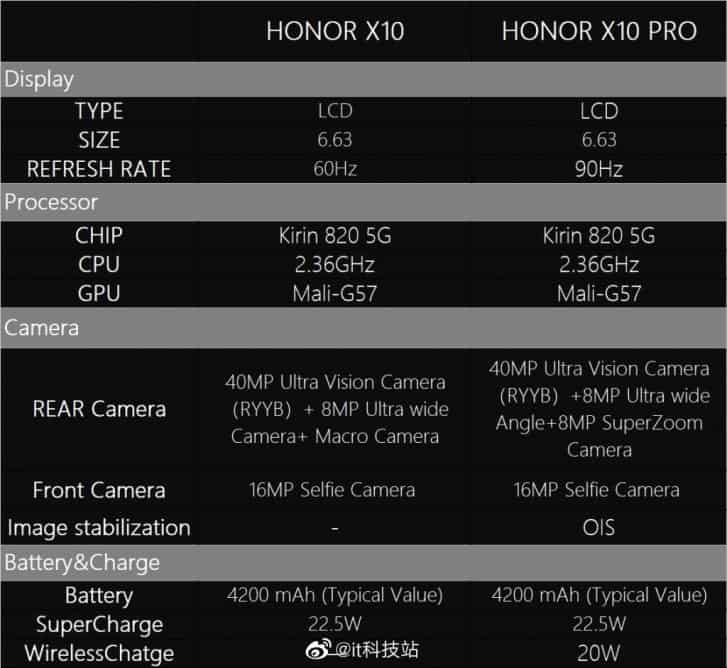 The camera setup is comparable to the Honor 30 series, that’s not a surprise. However, instead of punch-holes, the new handset will have truly-bezel-less displays thanks to the use of pop-up cameras. The selfie shooter will be the same for both variants with 16MP resolution. However, the Pro variant will include Optical Image Stabilization which is a Plus in a selfie camera.

Other specifications for the duo are slowly popping out as the launch nears. The Pro model is set to flaunt a 6.63-inch LCD panel just like the vanilla version. However, only the Pro has a 90Hz refresh rate. Both smartphones will be powered by the 5G capable Kirin 820. Both will also sport the same 4,200mAh battery with 22.5W fast-charging. However, the Pro variant will include 20W wireless charging.

Honor scheduled an event for May 20, next week. That’s when the new smartphones will be revealed.