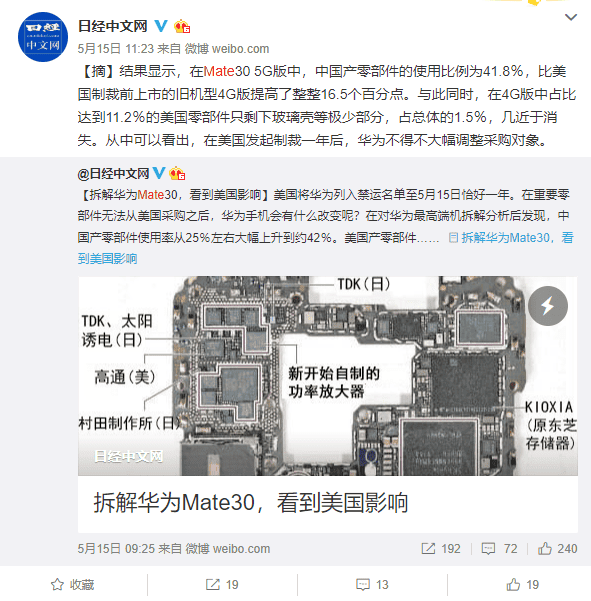 According to a report by Nikkei Asia, Huawei has really minimized its dependence on U.S. technology. After the release of the Huawei Mate 30 5G, a dismantling of this smartphone shows that 42% of the components are from China. This is a 16.5% increase over the 4G version that was released before the ban. In addition, only 1% of its components are from the U.S. This is quite a huge drop from 11% in the Mate 30 4G version.

In other reports, Huawei is still at loggerheads with the U.S. government. Actually, the company is keeping its cool but the U.S. government seems to be stiffening the ban on Huawei. Its mobile phones cannot use Google Mobile Services (GMS) since its inclusion in the U.S. entity list last year. In its latest announcement, the U.S. government said that any company that uses US technology must obtain a U.S. license before working for Huawei. This means that the likes of TSMC which is behind Huawei’s Kirin chips can not take orders from Huawei.

The Chinese manufacturer is seeking viable alternatives for all U.S. technology and so far it is not doing badly. The latest restriction from the U.S shows that Huawei is not falling as the U.S. government had hoped. A recent report claims that it had placed huge orders to the tune of $700 million from TSMC. It is also working closely with SMIC (a Chinese chip maker). These should keep the company floating until it gets a viable alternative.

Next Realme X3 SuperZoom landing in Europe on May 26