Samsung will launch the new Galaxy Note 20 series products in the second half of this year. Now the preview of Samsung Galaxy Note 20 design hit the web. The preview shows the central punch-hole camera design and the rear camera matrix module. According to popular Weibo leakster, Ice Universe, we do not need to believe the thick bezels of this preview because it can’t be that ugly. 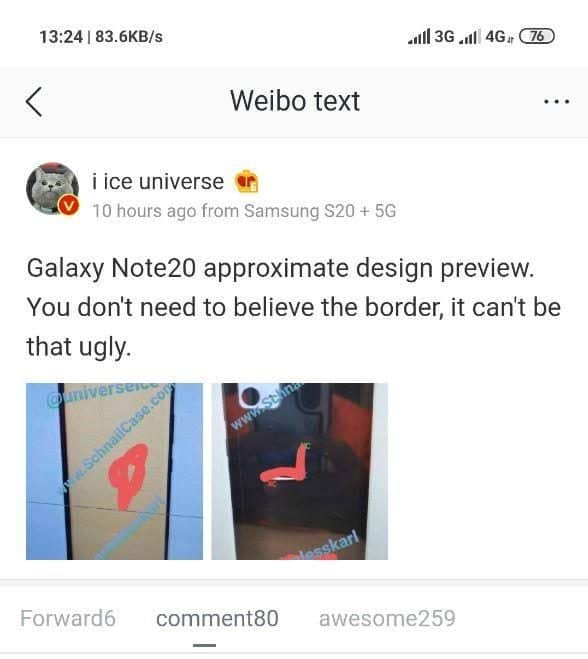 The Galaxy Note 20 series recently passed through GeekBench. According to the listing, this series will have at least 8GB and 12GB of RAM. Also, the phone’s processing unit appears with a “kona” symbol. This version should include the upcoming Qualcomm Snapdragon 865 Plus processor chip due to the processing speed of 3.09GHz, while the Snapdragon 865 speed reaches only 2.84GHz.

Expectations indicate that the SM-N986U model of the Note 20+ is the US market version. This is because the previous version of the Note 10 Plus came to the US market with model number SM-N976U. The Galaxy Note 20+ single-core test score hit 985 points on Geekbench 5.1 database. However, for the multi-core test, this smartphone hit 3220 points. On the other hand, the Korean giant did not specify a date for the official announcement of the Galaxy Note 20 series. However, a recent leak indicates that these smartphones may arrive in August.

Previous Redmi 10X Opened Appointment At JingDong, Coming On May 26

Next MIUI 12 global version is official: Discover all the new features!