The traditional smartphone makers are gradually entering the TV market. And if Xiaomi has done this way earlier, other brands are doing the same starting last year. Currently, among the popular smartphone manufacturers, we can mention Huawei/Honor, OnePlus, Realme, and even Nokia that are offering or will offer their own models. But Xiaomi has decided to make the competition fiercer bringing a new model to the market through its eco-chain enterprises. At today’s Yunmi 5G IoT new product launch conference, the company released the Yunmi smart screen products. In fact, with this move, it filled the gap in Yunmi’s large-screen products in the living room. 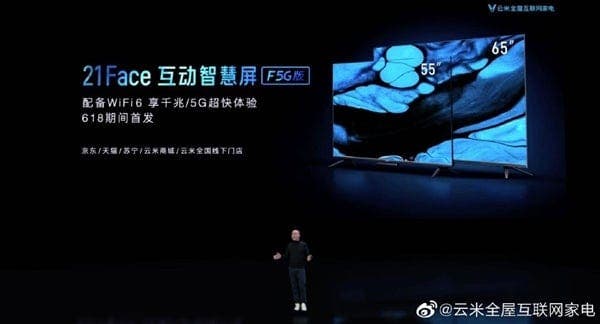 It is reported that the Yunmi smart screen, namely the Yunmi 21Face interactive smart screen has three sizes of 55-inch, 65-inch, and 75-inch. By the way, the 75-inch variant adopts a split design, a 7680×4320 8K resolution, a 120Hz high refresh rate, a screen color gamut coverage of BT709 143%, and a 3D- LUT color reproduction. They are known as broadcast-level monitoring color standards.

Under the hood, this TV carries a quad-core processor. The SoC integrates a dual-core GPU and an 8.5GB DDR memory. The total power of the Dolby Atmos split speaker is 100 watts.

In addition, this 75-inch 8K flagship TV also supports 5G networks. And it comes with AI and integrated two 3D interactive sensors, distance sensors, 1080P HD camera, and so on.

According to the official introduction, the three Yunmi smart screen TVs support AI somatosensory control. So you can do many operations such as fast-forwarding and adjusting the volume without the help of remote control.

Yunmi revealed that the 55-inch and 65-inch 21Face interactive smart screens supporting the Wi-Fi 6 network will be launched during 618.