This year, Google can decide on two unprecedented steps: bring the Pixel 4a with a very attractive price tag and abandon the flagship identity in Pixel 5. This later will then arrive at a reasonable price, much lower than its predecessor.

A curious survey was found in the Google Opinion Rewards application. In it, users are invited to express their preferences, which smartphone they would like to purchase. Google Pixel for $349 or a high-end device with a price tag of $699. Among the distinguishing features of the budget Pixel phone are the plastic case and a 3.5 mm audio jack. Describing another model, the manufacturer indicated that it is a flagship smartphone with water protection and wireless charging.

Google Pixel 5 smartphone will be cheaper than its predecessor 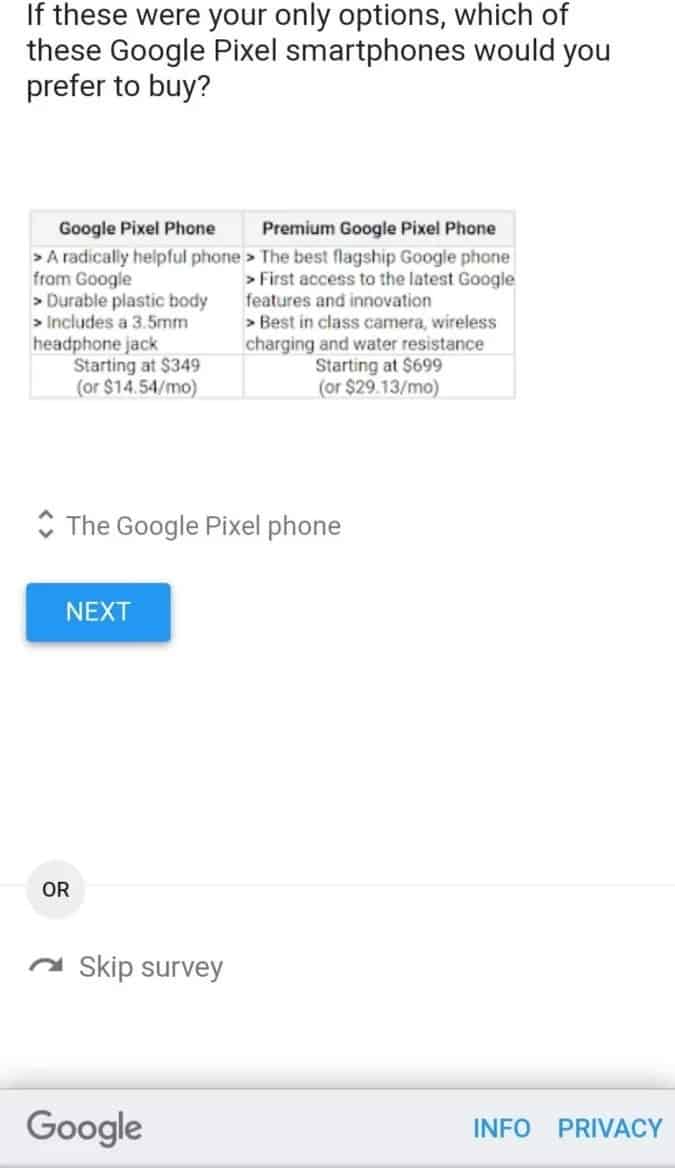 It’s not hard to guess that the company intends to sell Pixel 4a for $349, but they can request $699 for Pixel 5. Interestingly, the new generation of the flagship Pixel can be priced $100 lower than its predecessor. Recall that for Google Pixel 4 at the start of sales they asked for $799.

According to rumors that previously appeared on the network, the need to reduce the cost could be helped by abandoning the expensive flagship platform Snapdragon 865. Instead, Google might prefer the cheaper option – Snapdragon 765G. Although it is possible that the chip from the Qualcomm 700 series will go to the Pixel 5. While the Pixel 5 XL will get the Snapdragon 865.

In addition, previous leaked indicate that Google is planning to end support for the Active Edge function, both in the Pixel 4a and Pixel 5 smartphones. Many may know this function in previous Pixel smartphones or HTC devices. The smartphone can be squeezed to perform a function, for example, to start the assistant or the camera quickly. From my point of view, I have to say that, despite its presence, I never used this function. And I even felt it to be superfluous. Therefore, I will probably not notice their alleged lack of the Pixel 4a or subsequent devices such as the Pixel 5. But other users can certainly rate this differently.

The question that remains is whether Google is switching the function. At the beginning of the year, it was rumored that Google also allows functions to be carried out by tapping the back of a pixel smartphone with Android 11. However, we will keep you updated on this regard.