In the next week, we will have one of the most exciting events for Realme enthusiasts and technology enthusiasts. After all, the two-year-old company will give an important step to further establish its presence in this competitive market. Besides new flagship smartphones featuring high-end specifications and affordable price tags (Redmi X3 series and X50 Pro Player) the company will also announce its first smart TV and smartwatch. Moreover, the company will kick the doors of the so-called market of hearables. After all, the company will announce two new true-wireless earphones. The first will be a new affordable version for the last year’s Realme Buds Air, it will be called Realme Buds Air Neo. The second confirmed TWS earphones are the Realme Buds Q from a brand new lineup.

The company will be running events on India and China on the very same date. However, not all products will be present in the former market. While the Buds Air Neo is pretty much confirmed for India, the same can’t be said about the Buds Q. Today, Realme’s Chinese brand on Weibo confirmed that the Buds Q truly wireless earphones will also arrive on the next Monday’s event. 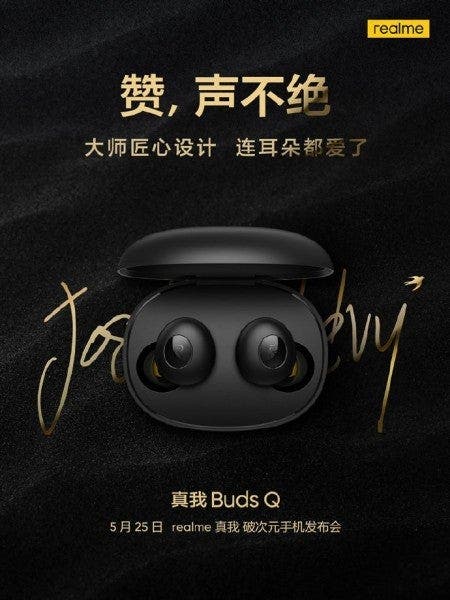 Interestingly enough, the poster also serves to give us the best look at the new pair of hearables. Worth noting that this isn’t a unique design at all. If you consider that the Buds Air family is pretty much close to the Apple AirPods in terms of the design, the Buds Q are somewhat allusions to Samsung’s Galaxy Buds. Unfortunately, apart from the design, the company didn’t reveal any feature coming with the new hearables. However, the Chinese firm confirmed a partnership with the French artist Hosé Lévy to design the Buds Q. According to it, the design is inspired by soft and round pebbles, thus allowing them to perfectly fit into user’s ears.

The Realme Buds Q have been certified in Indonesia last week

Interestingly enough, the Realme Buds Q have been certified by the Indonesian Telecom Authority a few days ago. The earbuds carried the model number RMA215. Unfortunately, no hardware details were confirmed by the certification. However, it’s a good hint that despite its launch in China, the new pair of hearables won’t be exclusive and should reach other markets pretty soon.

We believe that the Buds Q may include the ENC (environment noise canceling) feature.  After all, it doesn’t need to be really cheap since the Air Neo is already coming for the masses.

Previous A mysterious Poco M2 Pro has been certified