Samsung announced that they will be bringing new A-lineup smartphones to the United States. The lineup included Galaxy A01, A11, A21, A51 5G, and A71 5G. Now, the launch of Galaxy A71 seems near as it has been approved through the Bluetooth SIG. Moreover, there is also news regarding the carrier it will come with and the chipset that will be powering the phone.

Thanks to a report by XDA, A database has listed that the upcoming Galaxy A models that will support Verizon’s online services. The Bluetooth SIG certification suggests that Samsung will launch a custom version of the Galaxy A71 with Verizon. On the listing, we see that the phone comes with a code name “samsung_a71xq”. Here, A71 is the model where “x” stands for “5G” and “q” seems to be portraying “Qualcomm.” 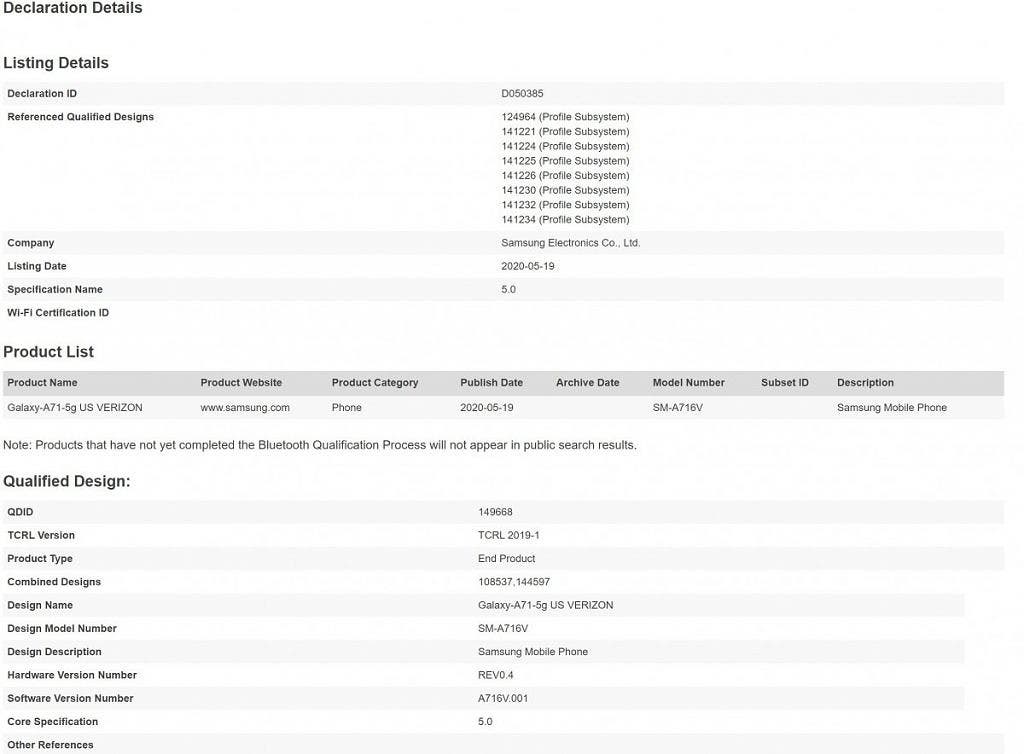 As you know, Samsung launches phones with different chipsets according to the region. Samsung’s own Exynos is used in Asia whereas they launch phones with Snapdragon chipsets in the USA. Hence, there are two solid hints that Samsung will be using a Snapdragon chipset for Galaxy A71 5G. But the question is which one?

Well, it seems almost impossible for Samsung to use flagship Snapdragon 865 on upper mid-range devices. But they can use Snapdragon 700 series chipsets. Snapdragon 765 and 765G are the two 5G mid-range chipsets offered by Qualcomm. And if we are not wrong, you may see a Snapdragon 765 powered Galaxy A71 5G in the United States. There is also a third chipset, which was launched silently, called Snapdragon 768G which has a minor improvement over the 765 chipsets.

Apart from the processor, the smartphone is going to feature identical specifications of the global version Galaxy A71. A 6.7-inch FHD+ Super AMOLED display is no less than beauty to enjoy multi-media on. There is a quad-camera setup consisting of 64-megapixel main paired with
12-megapixel ultra-wide and two 5-megapixel depth and macro sensors. There is a 32-megapixel front-facing shooter encaged in a dot-hole notch that is aligned in the center. 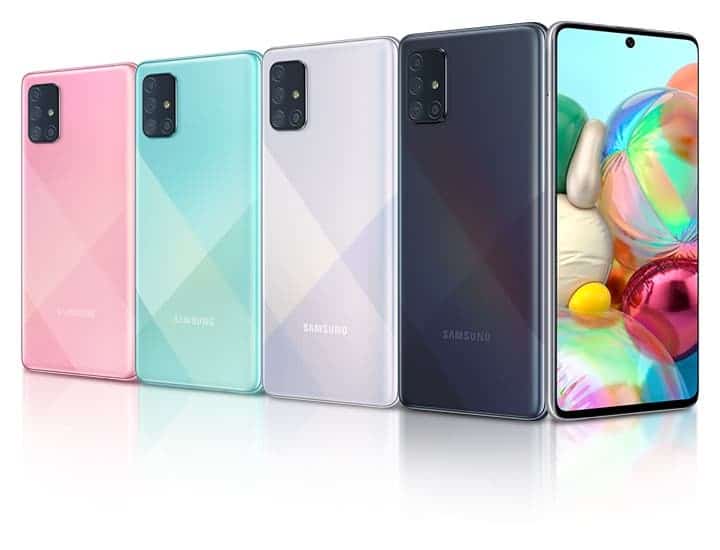 We get a 4,500mAh battery that can be charged at 25W Super Fast Charging. The device will be either paired with either 6 or 8 gigs of RAM and 128GB internal storage. Of course, you are going to need more space since there is a 64-megapixel shooter. For that we have a MicroSD slot that supports up to 1TB of external storage. For the biometrics, we have an in-display fingerprint scanner. Finally, the color option includes Prism Cube Black, Prism Cube Sliver, and Prism Cube Blue.

According to the XDA reports, Samsung Galaxy A71 5G is expected to launch in late June or early July in the USA. If priced right, the device will be a great mid-range 5G offerings from Samsung, What do you think about it? Do let us know in the comments section.