Huawei presented the P40 series of smartphones back in March. However, the show stopper, which is the P40 Pro Plus is yet to gon shelves and people are waiting for its sales to begin. Now, the latest leak has pointed out that the phone will hit the stores in June in China.

The latest leak coming right in from a reliable source in China points that the sales will begin Early June in China, highlighting the phone’s unique feature of having a first-in-line camera sensor, the Sony IMX 700. 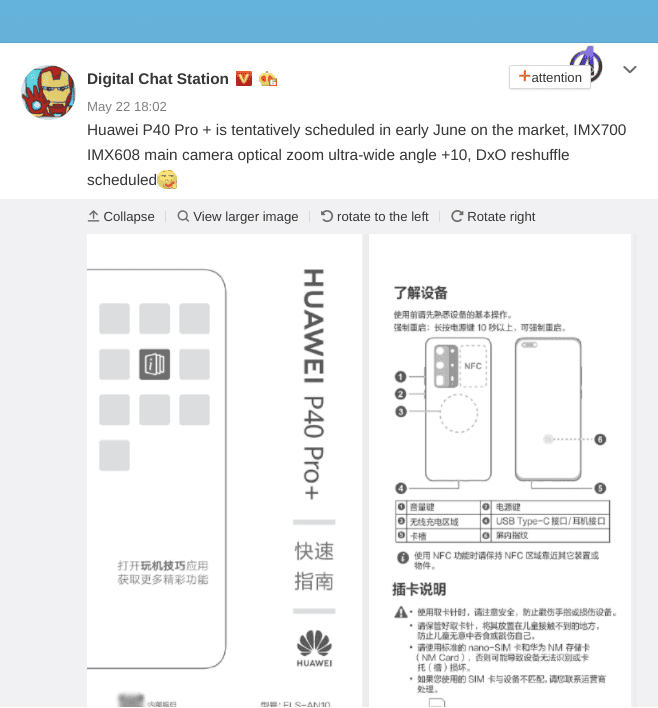 The source also posted a picture of a DXOMark listing indicating a review scheduled for the device. If we recall, the P40 pro had scored 128 on DXOMark testing. We can guess the Pro+ variant to score even better.

In addition to this, it has features like the 20X hybrid zoom, 100x Max Zoom, dual-tone LED flash, 4k video recording at 60fps, ISO 51200 and 7680fps Ultra Slow-Motion video capture facilities. The front has a 32MP f/2.2 primary shooter and an IR Depth/Bokeh camera for face unlock 4K recording.

Other Specifications and Price

Rest of the specifications of P40 Pro+ are similar to P40 Pro. It has a 6.58-inch Flex OLED display with 90HZ refresh rate and a resolution of 2640×1200 pixels. The flagship is powered by Kirin 990 5G SoC paired with 8GB of RAM and 256/512GB of storage. It also rocks an in-display fingerprint sensor, IP68 ratings for water and dust resistance, USB Type-C 3.1 Gen1 port for charging.

The phone runs on EMUI 10.1 based on Android 10. The phone comes in White Ceramic and Black Ceramic colour options. It will likely sell at a starting price of 1399 Euros.