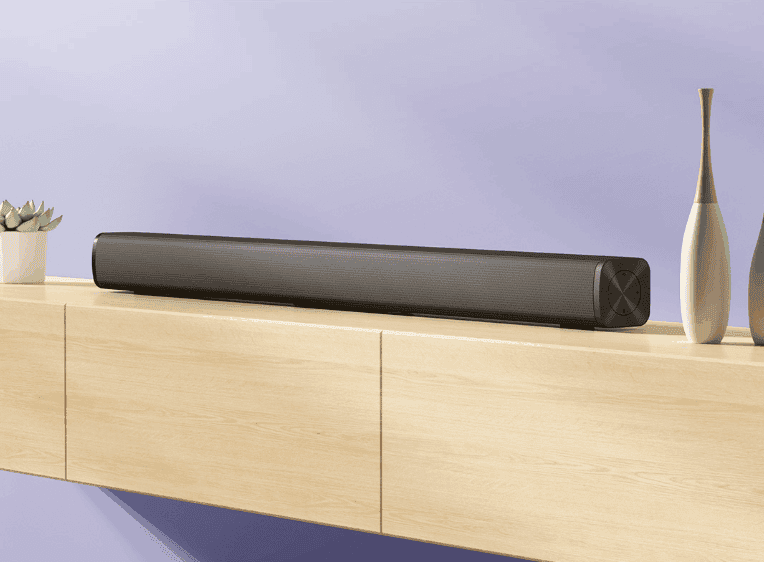 This Redmi TV soundbar is 78cm long, 6.4cm wide, 6.3cm high, and weighs 1.5Kg. It has a minimalist design and uses a matte black colour. In terms of installation, Redmi TV soundbars can be wall-mounted or placed in a desk like most soundbars. The Redmi TV soundbar also boasts of a two 45 × 80mm runway-type full-range speakers. Furthermore, its 30W speaker also uses a duct-type sound cavity.

In terms of connectivity, in addition to supporting Bluetooth 5.0 wireless connection, Redmi TV soundbar also supports S / PDIF and AUX wired connection. To reduce ambiguity, its wired connection only needs one wire to connect to the TV.

Obviously, it appears that Redmi is focusing on good sound with its latest products. The upcoming Redmi Smart TV X series already promises quality sound. Now, there is an independent soundbar for extra sound. A recent Redmi Smart TV X poster shows that it will come with a standard 8-unit subwoofer audio system. According to the official introduction, the whole system comes standard with an 8-unit subwoofer audio system and four 12.5W ultra-high-power speakers. They are capable of providing full-scene sound quality, just like being in a movie theater.

Previous information shows that the Redmi Smart TV X series uses a 4K ultra-high-definition screen and supports NTSC 85% wide color gamut. It will also be equipped with MEMC motion compensation technology and support 60Hz intelligent compensation algorithm to avoid problems such as ghosting and smearing due to insufficient video frames.

The Redmi Smart TV X series will officially arrive on May 26th. However, this smart TV will not be alone. Redmi is also preparing to launch a new RedmiBook at the same launch event. The RedmiBook is a 16.1-inch notebook that features an ultra-thin bezel with just 3.26mm. Interestingly, the display ratio is 90%. According to Redmi, the laptop size is 15-inch but its display reaches 16.1 inches because of the ultra-thin bezels. That will undoubtedly make this laptop much more elegant to look. Moreover, it will feature an sRGB color gamut with around 100%. According to Redmi, this notebook will use an AMD chip.

Next How iOS 14 leaked months before release?